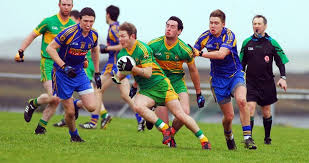 Gareth Concarr will be a key man for Ardara, as they seek to secure their passage to the knock-out stages of the Donegal SFC.

Mac Cumhaills welcome Ardara to Mac Cumhaill Park on Saturday evening knowing they need a victory to ensure they make the last eight of the Donegal SFC.

However, Ardara currently sit on three points and also need a result to ensure their passage to the knock-out stages of the championship.

Ardara defeated Glenfin by the minimum in a thrilling championship encounter last weekend.

Ardara and Four Masters are expected to win their final group game which would see both sides advance to the last eight.

However, Mac Cumhaills with home advantage will be confident they can cause something of an upset on Saturday night.

With quality players like Darren O’Leary, Marty O’Reilly at their disposal Mac Cumhaills are a match for anyone on their day.

However, Ardara have huge experience in their squad, and they’ve a great championship pedigree.

They ran Glenswilly as close as anyone last year in their Donegal SFC semi-final and will be expected to advance to the last eight again.