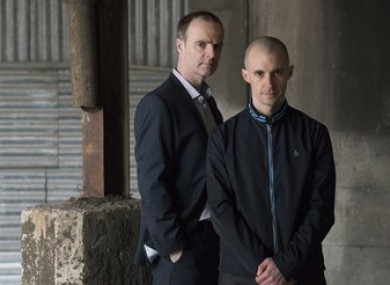 LOVE/HATE STAR SHOOTS DOWN NOMINATION OF McNULTY TO SEANAD

A leading actor on RTE’s hit TV show Love/Hate has slammed the nomination of Donegal businessman John McNulty to the Seanad.

Brian O’Byrne (left) who has slammed the nomination of John McNulty along with Tom Vaughan Lawlor who plays Nidge in Love/Hate. Image courtesy of RTE.

The actor said he was sure Kilcar Mr McNulty was a good businessman and community activist and “probably a great guy.”

But claimed he would not have been suitable for the board of the Irish Museum of Modern Art (Imma) or the Seanad.

“This man, a failed political candidate, was being given a Seanad seat because nobody gives a shit about the Seanad, and nobody cares about wasting money. Because this is how things work,” he said in an email to the Irish Times.

And he strongly criticised the Government and Minister for Arts Heather Humphreys on the eve of the Seanad byelection poll closure.

“I believe Minister Humphreys should be relieved of her duties. How she expects people in the artistic community to think she has their interests at heart would seem impossible,” he said.

Mr O’Byrne acknowledged that as he does not live in Ireland he did not know “the feeling on the ground”, but said any positive press in the US about Ireland was usually related to the arts.

“The arts and Irish artists are paraded to the world as ambassadors, and yet the new Minister seems to have shown utter disrespect to a community, I would imagine she would like to meet, for the first time it seems, on positive terms,” he said.

“Everything is ridiculous in McNultygate…I find the whole affair depressing and enraging.”

Mr O’Byrne, who is from Mullagh in Co Cavan and lives in the US, has starred in the film Million Dollar Baby, directed by Clint Eastwood, and numerous Broadway productions.

“Heather Humphreys should just say she was told to appoint someone, she had no idea who he was, it was only going to be for a few days anyway, and they thought no one would notice,” Mr O’Byrne said.

“So if the Government will do this on something as ‘small’, what are they doing on bigger issues?”