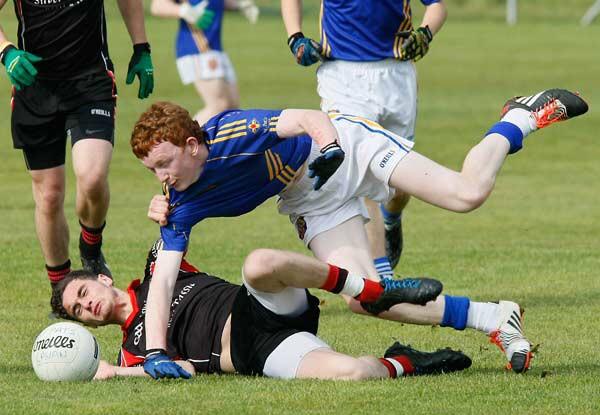 A GOAL in the 40th minute sorted out the first points of the Danske Bank MacRory Cup league in Drumragh, but it was a referee decision which swung this tie in favour of St Patrick’s.

The goal came from a good move from Cavan with substitute Shane Fortune playing a super ball in for Brian Sheanon to shoot to the net from close range.

After it however, Cavan seemed to lose their way a little and St Eunan’s came back to within a point with two minutes remaining.

The Donegal lads then had an opportunity to score an equaliser from a free but, according to the referee took too long over it.

He then threw the ball in, Cavan broke and Paul Leddy found the range. With Pearse Smyth adding another point in injury time, the Donegal boys were left disappointed.

The star of the show from a Cavan point of view was Thomas Edward Donohue with three excellent first half points and another after the break.

Those first half efforts came in response to a goal from Caolan McDaid in the 14th minute and helped Cavan edge ahead 0-6 to 1-2 at the break.

David Tyrell tied the scores with a free on the resumption, only for Sheanon’s goal to split them again. Despite Tyrell’s accuracy from frees – he bagged six over the hour – it was to be a turnover from one apparently not taken quickly enough that ultimately denied his team a share of the spoils.