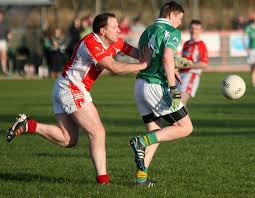 Dungloe will be hoping Adrian Sweeney will continue his fine form when they welcome Killybegs to Rosses Park on Sunday.

Dungloe welcome Killybegs to Rosses Park on Sunday afternoon, knowing they need a result to book their place in the last eight of the Donegal SFC.

Tony Boyle’s side have enjoyed a good season so far, they won promotion back to Division One last month having gone the entire season unbeaten in the league.

It’s now left qualification from the group on a knife edge, and they welcome a Killybegs side who have found a new lease of life in the championship.

Killybegs have endured a miserable league campaign, and have struggled all season in the bottom rung of Division Two.

But they’ve rejuvenated themselves in the championship and are unbeaten after their opening two games.

They earned a draw with Gaoth Dobhair in their opener and then last weekend a late spirited fight-back from Termon denied them a win.

They’ll travel to Dungloe confident they can secure a win that would see them advance to the last eight.

With home advantage and the star quality of Adrian Hanlon and Adrian Sweeney at their disposal, Tony Boyle will be confident his side has enough firepower to get the win they badly need.

Killybegs have proved they’ve got fantastic championship pedigree and with Hugh McFadden, Christopher Murrin and Brendan McGuire in their ranks they’ll be confident of getting the win.