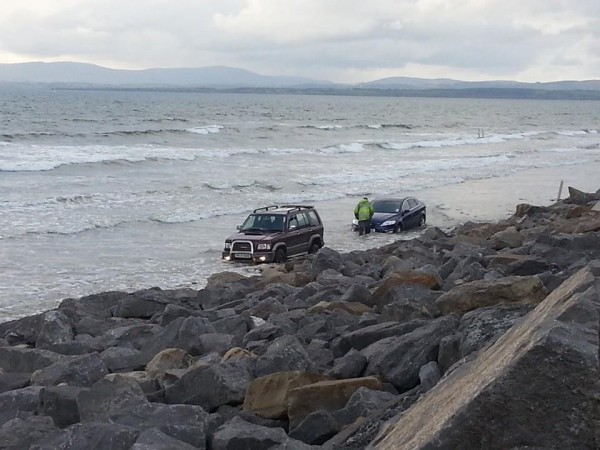 Two more motorists have had a lucky escape after their cars were caught by rising tides  on the beach at Rossnowlagh.

The incident occurred yesterday evening, and comes just 24 hours after a Toyota was swept away out to sea on the same beach.

Rossnowlagh is one of the most popular beaches in Donegal and attracts huge crowds throughout the year.

The Mondeo car this mroning.

However, the tide comes in exceptionally quick in Rossnowlagh which catches out unsuspecting beach goers.

There has been an on-going problem at the beach, particularly during the summer, with many beach goers parking their cars on the beach.

Its led to traffic jams on the beach due to the volume of cars on it, with people trying to get off the beach as quick as possible as the tides swarms in on them.

This latest incident again reiterated the dangers of parking your car on the beach at Rossnowlagh, thankfully though these two cars were saved this time round unlike the unfortunate Toyota.

FEARS FOR DRIVERS’ SAFETY AFTER ANOTHER TWO CARS CAUGHT BY RISING TIDES was last modified: October 10th, 2014 by Mark Forker