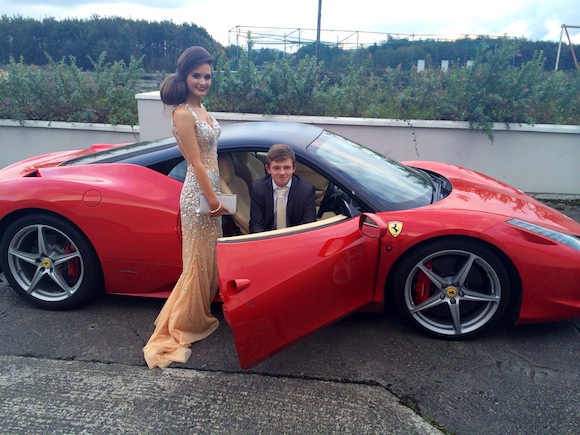 GIRLFRIEND GIVES HER BELOVED THE PERFECT PROM PRESENT – A FERRARI!

Michaela presents Jason with his new Ferrari – well for a night at least!

There was a time when you’d be lucky if your dad gave you a lift to your prom!

But Jason Flood from Manorcunningham needn’t have worried about that.

Because Jason now officially has the coolest girlfriend on the planet after Michaela Duddy arranged for him to travel to the Deele College prom in a Ferrari!

Michaela, from St Johnston, arranged to get a loan of the €226,000 fire-red Ferrari from a family friend.

And to say that car-mad Jason was speechless is a bit of an understatement.

The young couple, who are both 16, have been dating for more than a year now.

Jason, who attends St Eunans College in Letterkenny, looked ultra-cool behind the wheel of one of the world’s most amazing cars.

But it also helped that he had a stunning-looking young lady on his arm.

Some guys have all the luck!