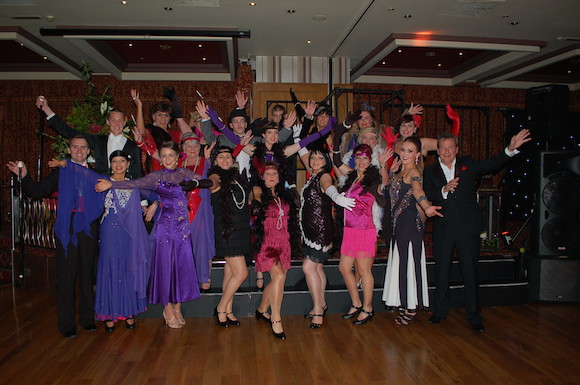 PUTTING ON THE RITZ FOR CANCER SUPPORT AT THE ABBEY

By Paul O’Sullivan: Water charges and next week’s Budget were the farthest things on everyone’s mind in the Abbey Hotel, Donegal Town on Saturday night last as they came in their hundreds for a non stop, full on night of costume, dance and drama in support of National Breast Cancer Research and the local Solace Cancer Support group.

The cabaret show “Putting on the Ritz” was probably one the best value for money (€10) entertainment shows this writer has seen for some time. The talent, energy, and slickness of production was as professional as they come.

It was the brainchild of Roisin Gillen (whose mum Robbie also participated) and involved professional dance instructor Shona Tinneny who gave her time free as did a cast of over twenty locals in support of Breast Cancer research.

An interesting “twist” to the evening was the performance of Scarlett Rose (aka Martin McGuinness from Ardara) who brought the house down. Martin gave his time and considerable time talent free gratis. Kara Kelly is a professional Burlesque performer and it was nice to see her back performing in her home town to support a great cause. Rachel McGroary, Tracey Faulkner and Azalice O Donavan could comfortably sing on any stage in any show.

Andrew Monk was a key ingredient in this extravagant show who entertained, provided sound and lighting and provided technical assistance. The majority of the cast was local, most of whom never performed in public. The performance of Thriller was spectacular with the “resurrected” cast dressed in 20’s costume giving a blistering performance. This Show has huge potential for further fundraising, it would be a shame if its’ energy and talent doesn’t go on to something much bigger.

The organisers would like to thank Donegal Daily for their publicity and support.

PUTTING ON THE RITZ FOR CANCER SUPPORT AT THE ABBEY was last modified: October 12th, 2014 by John2