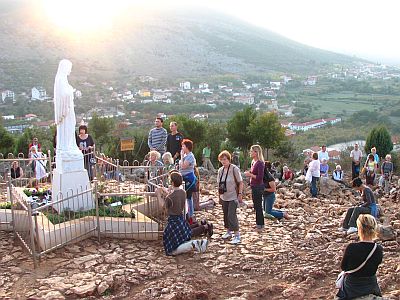 DONEGAL PILGRIMS’ PRAYERS AT 30,000 FT AS PLANE FORCED TO RETURN TO AIRPORT TWICE

Pligrims will finally get here today to Medjugorje

A GROUP of Donegal pilgrims finally arrived in the shrine in Medjugorje in the early hours of this morning – but not before praying for their own safe return TWICE after engine trouble on their plane.

The Europe Airpost jet took off yesterday morning from Dublin at 7.3oam bound for Split in Croatia.

But 15 minutes into the flight the pilot announced the crew were having technical difficulties and they were returning to Dublin.

After spending half an hour back at the airport, the jet with 164 passengers on board – 30 of them from Donegal – took off again.

But after crossing the Irish Sea the plane had the same problems; and half an hour later they were landing on the tarmac back at Dublin airport for the second time.

“It was a terrible ordeal and I don’t mind telling you I did a lot of praying on those two flights,” said one Donegal passenger who contacted us last night.

“To have a glitch once was bad; but the second time I just thought we’re never going to make it.”

Pilgrims had been at Dublin airport from dawn yesterday. A replacement plane took off late last night.

Niall Glynn of tour operators Marian Pilgrimages said a new plane from Paris had taken the passengers to the Croatian city of Split last night.

Mr Glynn said the technical problem appeared to have been a sensor that was triggered in flight, setting off an alert in the cockpit. After the first aborted flight, it was thought it had been repaired but, as proven in the second flight, it had not.

He said it was “understandable” that several of the would-be passengers were reluctant to give the plane a third go and so a new plane had had to be obtained from the airline, Europe Airpost, a France-based charter company that specialised in moving mail and newspapers during the night, and passengers during the day.

DONEGAL PILGRIMS’ PRAYERS AT 30,000 FT AS PLANE FORCED TO RETURN TO AIRPORT TWICE was last modified: October 16th, 2014 by John2