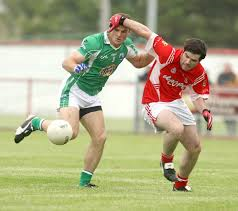 ‘This machine runs on green’ – Conor Greene will be a key man for Dungloe on Sunday.

Tony Boyle’s Dungloe side will go into this weekend’s Donegal SFC quarter-final as underdogs but they’re confident they can surprise a few people on Sunday evening at Mac Cumhaill Park.

Dungloe topped their group which consisted of Termon, Killybegs and Gaoth Dobhair, with the latter exiting sensationally after being defeated by Termon last Sunday.

Under Boyle’s tenure this season, Dungloe went the entire Division Two campaign unbeaten as they gained promotion back to Division One for the 2015 season.

They defeated both Termon and Killybegs at home in the Donegal SFC and were narrowly defeated by local rivals Gaoth Dobhair.

On Sunday, they face a different proposition altogether in the form of Tony Wilkinson’s St Michael’s team who have impressed in recent weeks.

They lost an utterly drab and defensive affair last week against Glenswilly despite being the better side throughout.

However, it was their clinical performance over Kilcar that has them earmarked as potential winners of the Donegal SFC.

They’ve a system in place, in which the players have adapted to with ease, and seem to enjoy playing it.

The pace at which they counter-attack is difficult to contain, and with the quality of personnel at their disposal it’s easy to see why they’re contenders.

Dungloe have a wealth of experienced campaigners in their side, but they’ve blooded a lot of youth this season and have a good mixture in their side.

Dungloe have caused several upsets in the past at the quarter-final juncture of the Donegal SFC.

In 2007 they knocked out then reigning champions and bitter rivals Gaoth Dobhair, but lost the subsequent semi-final to Glenswilly.

In 2012, they knocked out the then reigning champions Glenswilly, before losing out to St Eunan’s in the semi-final.

While in 2009, they defeated St Michael’s at the quarter-final stage to set up a semi-final meeting with the Letterkenny men.

They’ve a pedigree for upsetting the odds, and with silverware already secured this season, and confidence high from having topped the group, Tony Boyle’s side are high in confidence heading into this one.

Granted St Michael’s have been hugely impressive in recent weeks and have a fantastic team capable of winning the championship outright.

On paper, you’d have to fancy St Michael’s, but games aren’t won on paper, and the game on Sunday evening will be an intriguing one.

Will St Michael’s continue to adopt the suffocating blanket defence approach that frustrates their opponents into making mistakes? Or will they take the game to Dungloe?

Dungloe are renowned for their ability to hold possession, they tend go side to side sometimes to the frustration of their home support, but that tactic could suit them against the defensive system that will more than likely be employed by St Michael’s.

There’s bound to be a shock somewhere in the last eight, and it’s going to be at Mac Cumhaill Park on Sunday.