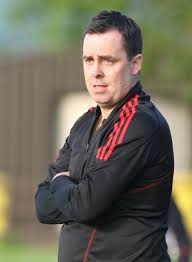 Brian ‘Dinky’ Dorrian is hoping his side can get off to a winning start on Sunday when they play Cavan/Monaghan select team at Ballyare.

Brian ‘Dinky’ Dorrian is confident the squad he has assembled is good enough to get his Donegal League select side into the knockout stages of the Oscar Traynor competition.

The former Sligo Rovers reserve and U20 manager, is the current boss at St Catherine’s, and has established himself as one of the top coaches in Donegal over the last decade.

He unearthed the likes of Shaun Kelly (Derry City) and Seamus Coleman (Everton) during his time as manager of the underage sides at the Killybegs club.

His focus now however, is to prepare the Donegal League side for their forthcoming Oscar Traynor campaign, which gets underway this Sunday.

Dorrian’s side face a Cavan/Monaghan select side, who have returned to the competition after a number of years out of it and are something of an unknown entity.

However, Dorrian has used his extensive contacts in the game to find out as much as he possibly can about the side he’s facing on Sunday.

In the lead up to the match this Sunday, Dorrian spoke to Donegal Daily about his side’s prospects in the competition.

Dorrian said, “We’ve assembled a good side, and we’ve a good mixture of experience and quality.

“We’ve got both Matthew Crossan and Gary Crossan in the side, and those two have a wealth of experience at a very high level.

“Shane O’Rourke who played in the League Of Ireland with Salthill is on-board, and Benny McLaughlin is also involved, so we’ve got a lot of quality and experience in the side.

Dorrian admits his side need to give a good account of themselves in this year’s competition after a number of disappointing years in the competition in the last while.

Dorrian has adopted an ultra professional approach to the competition, and his side have been preparing for the competition for over six weeks now, he’s hoping their approach pays dividends.

“We’ve approached it as professionally as we can, and the players have responded to that really well.

“They realise it’s an honour to represent your county at any level, and they’re looking forward to the competition.

“We’ve played a number of matches, and we’ve performed well in them, we’ve met up collectively twice-a-week and the commitment the players have given so far has been top class.

“We want to give a good account of ourselves, as players and as a management set-up, so we’re leaving no stone unturned in our preparation for the match.

Dorrian admitted that neighbours and bitter rivals Inishowen are the benchmark his team are aiming to match.

Inishowen reached the final of the competition two years ago, and made a semi-final appearance last year.

“They’re a quality outfit, and they’ve shown that over the last number of years, they’ve raised the bar, and we need to get to that level.

“But as I’ve said, I’m more than happy with the squad I have, and I believe we can have a good run in the competition.

“Our aim is to get out of the group, and then see where that takes us, it’s going to be difficult, but we’re up for the challenge as a group, and are really looking forward to it.

First up for Dorrian is that tricky assignment against Cavan/Monaghan on Sunday in Ballyare, kick-off is at 2.30pm.

DORRIAN CONFIDENT HIS SIDE CAN MAKE AN IMPACT IN OSCAR TRAYNOR COMPETITION was last modified: October 17th, 2014 by Mark Forker