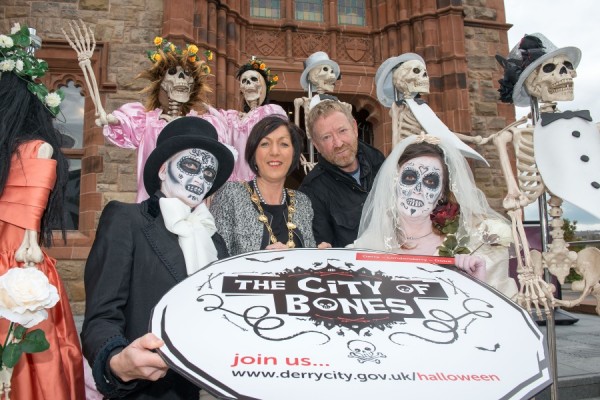 It’s October and for the good citizens of Derry that can only mean one thing – Hallowe’en is coming!

And this year the city will transform into the ultimate deadly destination for a haunting Hallowe’en to remember – the City of Bones!

Over the past four decades Derry has established itself as the Hallowe’en capital of Europe.

With thousands of revellers flocking to the city annually for the Hallowe’en party to end all parties, and the packed programme for 2014’s Banks of the Foyle Hallowe’en Carnival features some exciting new events that will have you quaking in your boots.

Forget Amityville – enter the spooktacular Chateau Le Fear which will take over Ebrington Square from October 17 – November 2, bringing all your worst nightmares to life.

Enjoy the fun at the Freaky Funfair which will also take up residence in the Square from October 22 – November 2, with its own gruesome Hallowe’en ghost train.

Mayor of Derry Councillor Brenda Stevenson said the programme featured fun for all the family.

She told Donegal Daily, “Hallowe’en is Derry’s annual highlight event and there’s definitely no better time to visit the city.

“The festival atmosphere is incredible and there are activities for all age groups, making it the ultimate family friendly destination.

“As the Festival takes place on Friday this year, the fun spills over right into the weekend, making it ideal for anyone planning a mid-term family break.

“So why not join us in the City of Bones for a fright night celebration to remember?

The programme is full of ghostly goings on taking place at venues right across the city.

You can even play your part in the fun and festivities by answering the Call to the Dance and joining the hundreds of local groups taking part in the main Halloween Carnival event, which takes place at 7pm on Hallowe’en night.

The main Carnival parade will be followed by a spectacular fireworks display on the Banks of the River Foyle at 8pm.

If you want to find out more about the spectres that stir in the City of Bones then hop on the ghastly ghost bus for a terrifying tour of Derry, or enjoy some fearsome family fun in St Columb’s Hall.

Walk the city’s historic ramparts if you dare during the Awakening of the Walls, with thrills and spills aplenty in store for your tiny ghosts and ghouls from October 30 – November 1.

And if you survive the spine-chilling surprises then why not sample some of the impressive fayre at the immense Tower Grill, which will be cooking up some devilicious delights in the Guildhall Square.

Throughout the city enjoy spooky story-telling, bat-watching, creepy crafts, scary shows and fiendish fun aplenty. Some fantastic mid-term value breaks are available in the city with full details at the web address below. So jump on the nearest ghost train and enter the City of Bones if you dare!

For a full programme of all the events taking place over the week go to www.derrycity.gov.uk/halloween