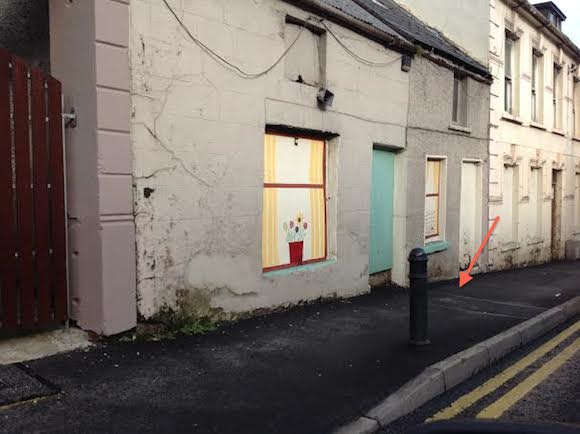 TO BE fair to the people of Ballybofey, they’ve done a wonderful job disguising some of the empty main street properties – to make the town look that wee bit better.

Just beside Bonner’s Corner Bar is a wee cottage, where a lick of paint makes it look as if it’s occupied.

But no-one would ever believe it is actually occupied – unless you’re a contractor for Irish Water.

For contractors from GMC Sierra decided they’d install a water meter at the house…just in case.

Two men spent half an hour on the main street outside the house fitting a water meter for the property which local people say hasn’t been occupied for years.

It’s not as if the painted flowers on the wooden boards in the windows even look REAL!

“I saw this and thought ‘you couldn’t make this up’,” said one eye-witness.

“Two guys from the contractors parked their silver van further up the street, walked down with all their gear and began fitting the meter outside.

“It probably means that whoever actually owns that place will have to pay some sort of charge even though they aren’t using water at all.

“It was like something out of a cartoon, two cartoon Irish Water boys putting a cartoon meter outside a cartoon house; except no-one is laughing.”

Of course it isn’t a cartoon – water charges are very real.

But the incident does raise serious questions.

Our picture shows the small metal cover over the newly-installed meter.