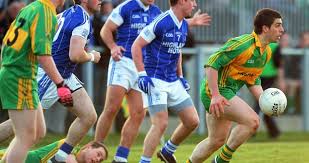 A late foul on Paddy McGrath earned Ardara the crucial free they needed to level their Donegal SFC match with Naomh Conaill at Tir Chonaill Park this afternoon.

Naomh Conaill and Ardara couldn’t be separated after sixty minutes of an hugely intense and highly exciting Donegal SFC quarter-final.

The two sides will have to meet again in a replay on Wednesday night at Mac Cumhaill Park.

Naomh Conaill did trail by five points at one stage in the second-half, but showed fantastic character to power back and lead with just two minutes of normal time left to play.

However, a great move involving the inspirational Kenneth Doherty, Stephen McHugh and CJ Molloy ended with a foul on Donegal star Paddy McGrath.

Brendan McNelis duly dispatched the free to level the match and take the game to a replay.

Naomh Conaill had a late chance to win it, but Anthony Thompson’s effort drifted wide.

Anthony Thompson had a great game for Paddy Campbell’s side and he was ably assisted by Dermot ‘The Brick’ Molloy who kicked six points.

Scores were at premium and Ardara struggled to penetrate the Naomh Conaill rear-guard, Brendan McNelis, Gareth Concarr and Tomas Boyle all posted scores for Ardara.

However, a goal from Ryan Melly swung the game in Ardara’s favour in complete and when Melly and Kieran Breslin pointed for Ardara they lead by five points.

When Anthony Thompson pointed with two minutes to go, it looked like he had snatched victory for Naomh Conaill.

However, Ardara had different ideas, and a fast flowing move ended in the concession of a free after a foul was committed on Paddy McGrath.

Up stepped McNelis to ensure the two old foes do it all over again mid-week.