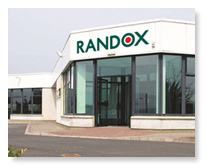 AN astonishing 500 new jobs are set to be announced this week for Dungloe, Donegal Daily can reveal.

The biggest jobs announcement in years will be for the Randox company which is already based there.

Randox has already invested in a diagnostic manufacturing and research and development facility in Dungloe where just over 60 people currently work.

However we understand the company will unveil ambitious plans on Monday which will see the workforce increased to 550 between now and 2020.

Randox Teoranta is an off-shoot of Randox in the North.

The new jobs are for highly trained scientists and software engineers and will focus on new diagnostic solutions that will improve healthcare globally.

The announcement will include an investment of more than €25M in the next five or six years.

It’s understood Údarás na Gaeltachta have been in talks with Randox for months.

“This has been a brilliant journey for Údarás and Randox and this is one of the best days for jobs in Donegal in a very long time,” said one source.