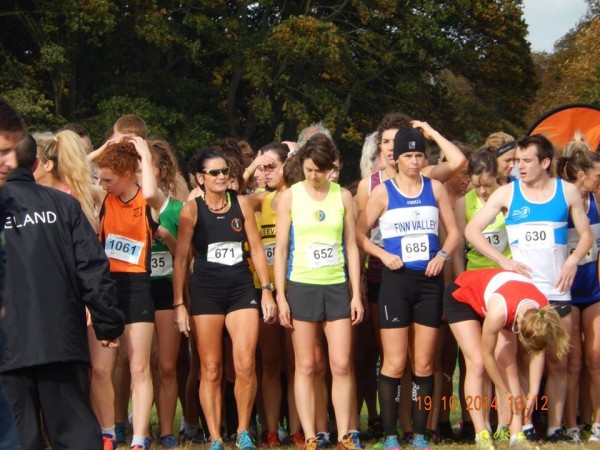 The Autumn cross country 8k in the Phoenix Park hosted by AAI on this occassion pretty much involved all the major players in that discipline of the sport based here on the Island as it traditionally has including as it does trials for Masters teams for forthcoming international at Nottingham Nov 16th . Finn Valley travelled with a mixture of athletes to engage to get a race under their belt and be in a position to ascertain current form in view of upcoming challenges . The outcome reasonably positive as the mens team finished a close 2nd to Raheny and a number of master athletes put themselves in the frame for selection . That senior team had Gerard Gallagher 27th 2.15 seconds down on race winner Brendan O Neill from Dublin ,Barry Harron a very positive 30th some 4 secs back ,Mark Hoy 33rd 6 secs adrift of that just 10 secs seperating these lads who had Dermot Brennan 43rd closing in the team .

The women 5k had the ever reliable Catriona Devine 21st,and as was the case with Catherine Dooher an exemplary positive squad member ,and Donna Evans each finished 4th in their age group category putting them in the frame for selection consideration . In the mens event Kieran Carlin 3rd in his category surely guaranteed selection with an anticipated solid performance and back again to Barry Harron to note that he is a master athlete and his was a noteworthy run . Teresa Doherty was 5th lady across the line the winner being twice european cross country champion Finn Britton and no doubt will have benefitted immensely from ther outing . Full marks to all who travelled as obviously this was where the challenge was over the weekend and access now and train to improve has to be the message as the local focus will be on defending both Donegal senior titles on Nov 2nd 12 noon at FVAC . Elsewhere Adam Speer had an encouraging run in the New Mills 10k on Saturday finishing 4th .

This weekend is dedicated to underage Ulster champs at UUJ Saturday bus leaving Finn Valley 8 am via Letterkenny Bridgend while quite a number of adult athletes are all set for the Dublin marathon having logged miles and miles for many weeks .

Finally pleased to report that Sarah Collins has been nominated for an award at the annual AAI awards in a few weeks in Dublin Sarah currently out of action with a knee injury which is showing slight improvement is back at her U S training base in Providence . Pauric Mc Laughlin was 2nd scorer for his U S University in a pre conference race despite taking a fall so hes surely will come away from that upbeat .