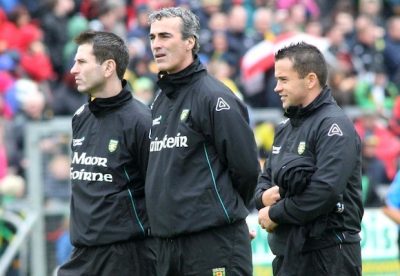 Former Donegal manager Jim McGuinness has chosen to remain coy on the possibility of former assistant manager Rory Gallagher replacing him as the new Donegal manager.

Former Donegal manager Jim McGuinness has refused to comment on who he thinks will be his successor, as the Donegal County Board begin their interview process with the potential candidates.

Rory Gallagher, who was McGuinness’s assistant for three years is the hot favourite to land the role of Donegal manager.

It’s believed that McGuinness and Gallagher didn’t part company on the best of terms, when McGuinness made the decision to axe Gallagher and Maxi Curran from his backroom staff at the end of 2013.

When quizzed about his potential successor, McGuinness remained coy and said he felt that it was a key thing for him not to be involved in the search for his replacement.

McGuinness told The Irish Daily Star, “I think the key thing for me is not to be involved in anything to do with the processes in Donegal.

“I know everybody that’s in for the job, some of them very well.

“I worked with Cathal Corey as joint-manager with Glenties.

McGuinness also believes his successor is walking into a brilliant job, and has a lot to work with, and says there’s still a huge hunger within the squad for more success.

McGuinness said, “I think it’s a brilliant job for the man that gets it.

“We’re in Division One. We’re Ulster Champions. We’ve just been beaten in an All-Ireland Final. So there’s three positives.

“I think it’s a really good job for anyone, and there’s a big, big hunger within the squad.