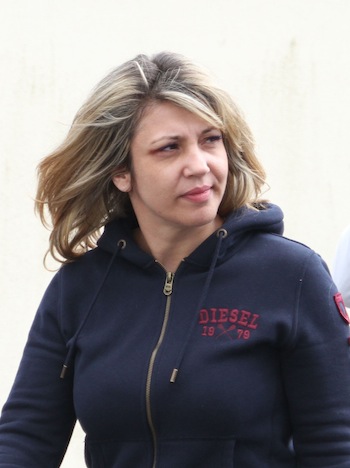 PROSTITUTE GIVEN €1,200 BY JUDGE TO FLY HOME IS BACK WORKING IN DONEGAL

SPECIAL INVESTIGATION: A prostitute who was part of a group of women given €1,200 by a judge to leave Ireland is back offering her services in Co Donegal, we can reveal.

Prostitute Mikeala Niculae, 37 who has returned to Ireland after a Letterkenny court paid for her return home. (North West Newspix)

Mikaela Niculae, 37, appeared at a special sitting of Letterkenny District Court in June.

She was one of six people who appeared in court in connection with a prostitution ring which was busted by Gardai.

Judge Paul Kelly gave four of the prostitutes €1,200 from €5,890 in cash which was seized in the raids on brothels at Riverside Apartments in Letterkenny.

But a Donegal Daily investigation has found that Niculae has been back in Letterkenny for almost two weeks working as a prostitute at an address at Lower Main Street.

The cheeky prostitute was one of six people arrested during undercover Gada investigation back in June.

The women were sending money back to their countries to support their families, solicitor Patsy Gallagher said.

“The fact that €15,000 would build a lovely home back in Romania, a very poor part of the country where they come from, speaks for itself,” said Mr Gallagher.

He revealed that with the arrival of the Donegal International Rally into Letterkenny that weekend, they were hoping to be kept very busy.

“Of course the weekend that is in it they were hoping to have a bumper weekend with the rally coming up but they are hoping to get out of town as quickly as possible.”

But Gardai argued that the women had been overheard saying they planned to return to prostitution.

A total of three different apartments in the same complex were raided as part of the planned Garda operation.

Another of the prostitutes was hiding in a wardrobe.

Detective Sergeant Mick Carroll said all four women had taken out adverts for sexual services on the Escort Ireland website and three phones used on these adverts were seized.

He said the women had been in Ireland for a number of months working as prostitutes.

After considering the case Judge Kelly ordered the women to return to their country of origin telling the women’s solicitors “They are getting a very good deal.”

But just weeks after leaving the country, Mikaela Niculae is back operating from an apartment in Letterkenny.

She is again advertising her services in online contacts website Escort Ireland saying which will be in Letterkenny until October 22nd next.

At least ten other women are also advertising their services in the contacts website in the Letterkenny area.

She has also been observed at the Lower Main Street area of the town.

Niculae is offering a wide range of sexual services and even uses the same name and pictures of herself.

A Garda spokesman said they are now investigating the situation.

“This matter will be looked into as part of the information we have received. We cannot comment any further at this stage,” said the spokesman.

PROSTITUTE GIVEN €1,200 BY JUDGE TO FLY HOME IS BACK WORKING IN DONEGAL was last modified: October 20th, 2014 by Stephen Maguire