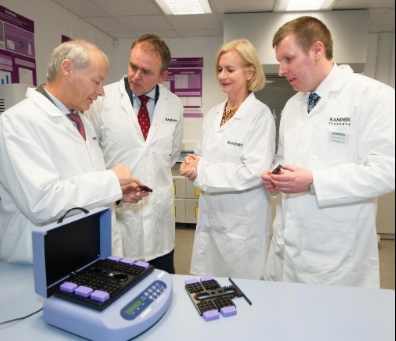 Randox Laboratories, the leading medical diagnostics company, today set out a new vision for the company’s future in Dungloe which is set to benefit the wider North West region with a massive jobs boost.

Randox Teoranta’s facility in Dungloe is a cutting-edge life-science and engineering research and manufacturing centre, and today the company announced its plans to invest a further €25m in plant, equipment, building works and R&D over the next 5 to 6 years in Dungloe. This significant investment would increase its employment figures from 66 to 540 by 2020.

Part of Randox Laboratories, the global diagnostics group, Randox Teoranta was founded in 2008 as a next generation life-sciences and engineering research and manufacturing centre, with support from Údarás na Gaeltachta. In addition to engineering, Randox Teoranta is the site of world-class scientific research into conditions impacting human health such as Alzheimer’s and diseases of the kidneys and liver.

At the event Randox Teoranta showcased their newly expanded and refurbished facilities, and guests were briefed on Randox, their contribution to human health worldwide, and the company’s investment plans.

Speaking at the event, Founder and Managing Director of Randox Laboratories, Dr. Peter FitzGerald said, “Today we write the next chapter of the Randox story, a company that is committed to improving and saving lives through innovative diagnostics. Our strategy for Randox Dungloe 2020 is a strong demonstration of our commitment to the region, and indicates our commitment to Randox Teoranta as an integral part of our future plans.

“This is a visionary project with the power to transform the high-value knowledge economy of the region and we are excited by its potential. Our key message today is one of partnership, harnessing the power of the community and the diaspora is the key to help this company grow.

“We are planning to create cutting-edge scientific and engineering opportunities on a major scale. That would mean drawing talent from far and wide in order to drive innovation in human health. Randox recognises that we cannot achieve this alone, we need to harness the power of the North West community and its diaspora to highlight the potential for high-value careers in life sciences R&D, engineering, software development and manufacture in Donegal, coupled with the unique quality of life it offers.”

Welcoming the announcement Joe McHugh T.D., Minister of State at the Department of Arts, Heritage and the Gaeltacht said “This is a significant announcement by Randox today, a company that is a world leader in clinical diagnostics, stating that its vision is to establish Randox Teo in Dungloe as a centre of excellence and develop the facility as one of the most futuristic and diagnostic manufacturing centres in the world. This announcement illustrates the company’s huge commitment to the area and its workforce.

“I commend Údarás na Gaeltachta for all its work in attracting Randox to Dungloe and the support it has provided to the company thus far. I will be working with Údarás and Randox in the coming months to make every effort to ensure that the company’s plans can be brought to fruition.”

Údarás na Gaeltachta, Chairperson, Anna Ní Ghallachair said they are committed to working with Randox on their strategy and vision to establish the facility in Dungloe as a world class knowledge centre.

“The spectrum of highly-skilled job-types that this investment could create would provide significant opportunities to the Gaeltacht labour-force now and in the future. This also gives Gaeltacht graduates living in other parts of the country and abroad the opportunity to apply their qualifications and experience and return to their local area, as was done by the R&D manager at Randox Teo, Dr Ciarán Richardson.”

The company said it would be keen to engage locally and with key diaspora networks to access people who may have moved away for education or employment, as well as those with a broader connection to the region. Guests were invited from every secondary school in Donegal, as well as a wider higher educational, community and economic stakeholders.

Chief Research Scientist at Randox Teoranta Dr Ciaran Richardson said, “As well as planning to attract key skills back into the region, we want to lay foundations for sustainable growth. That means working with partners in education and economic development who shape the skills-base, making sure there is a strong pipeline of STEM graduates and other qualified personnel. Today is only start of that engagement.”