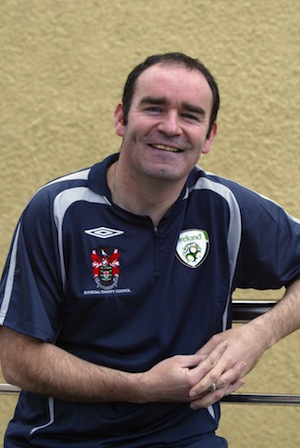 TREVOR SCANLON IS APPOINTED AS FINN HARPS’ HEAD OF ACADEMY

Finn Harps have confirmed the appointment of Trevor Scanlon as Head of the club’s Academy.

The former Harps and Sligo Rovers defender will take up the position following his role at Letterkenny Rovers where Trevor has been first team manager since 2013.

The Finn Harps Academy currently has three age groups expanding to five for the 2015 season.

The Sligoman said he is looking forward to the new challenge.

“The Finn Harps Academy is a great opportunity for me to bring some of my experiences from my time in the F.A.I. to assist the coaches in helping the players improve. We want to provide the players with a more challenging level of training enabling them to develop all their capacities to their full potential,” he said.

“For me it is important that Finn Harps are trying to do things the right way. The link created between all the stakeholders in local football is crucial in the development of players throughout the county. The Donegal Schoolboys league, the grassroots clubs, the players, transparency in the way the club deals with these and how the club can play its part in helping to improve each element is key. Working in partnership with the D.S.L. and the county managers, the Academy gives more kids an opportunity to avail of quality coaching in a structured environment.”

James Rodgers, Chairman of the Finn Harps Academy Committee said they are delighted that Trevor is coming on board as Head of Academy.

“He has a wealth of experience in all areas of player development and this will be of huge benefit to the coaches and players at the Academy. While we are happy with the progress we have made so far we have been patient in building the project at a pace we feel is manageable and best for the players. Trevor’s appointment is another big step in the right direction and we are looking forward to working with him on the next phase of the Academy’s development.”