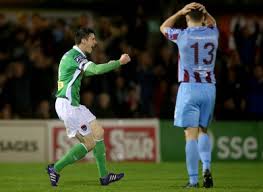 Ballybofey native Johnny Dunleavy is aiming to finish the job off on Friday Night, as the Cork City skipper takes his side to Dundalk for the league decider.

Cork City skipper Johnny Dunleavy said his club have been a sleeping giant for long enough, and that it’s time to finish off the job when they travel to Oriel Park on Friday night.

Ballybofey native Dunleavy has enjoyed a superb season for Cork City, and recently penned a new deal which keeps him at the club for next season.

On Friday night, Dunleavy and his colleagues travel to Dundalk knowing if they avoid defeat they’ll be crowned Airtricity League champions.

They currently lead Stephen Kenny’s side by one point after they slipped up against Bray Wanderers last weekend.

Dundalk were held to a 1-1 draw by Bray, and John Caulfield’s Cork City side took full advantage with a victory against Bohemians.

However, with the two facing off against each other on Friday night, it’s makes for a perfect finale to what has been an incredibly exciting league campaign.

With both sides absolutely desperate for the title, the stakes couldn’t get any higher.

Dunleavy told The Irish Daily Star, “We’ve got to go and finish the job, we’re in a great position now because we’re top, and Friday night is going to be some match.

“They’re a top side, and they’ve lead since May, but we’ve kept plugging away, and I’d no idea we went top until after the game, when I heard their result.

Dunleavy admits it does change the scenario a small bit, but says they’ll approach it the same way.

“Look we didn’t expect that result, and we probably thought we were going to have to beat Dundalk, now we know a draw will do, but we’re going to approach it in the same way we always approach games.

“We’ve been a sleeping giant for long enough, and it’s time to change that.

Cork City have been allocated with 600 tickets for Friday’s match, and the game is also being televised live on RTE Two.

Dunleavy expects there to be more Cork City fans than the 600 that’s been touted.

“I’m sure they’ll dotted all over the ground, and they’ll be a right few from Ballybofey down as well.