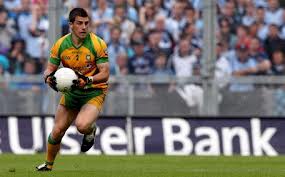 DONEGAL SFC: NAOMH CONAILL AND ARDARA BATTLE IT OUT AGAIN FOR SEMI-FINAL SPOT

Paddy McGrath will be a key man for Ardara tonight as they seek to put local rivals Naomh Conaill to the sword and book their place in the last four of the Donegal SFC.

Naomh Conaill face off with bitter rivals Ardara tonight for a coveted spot in the last four of the Donegal SFC.

Naomh Conaill and Ardara played out an enthralling quarter-final clash at Tir Chonaill Park on Saturday, but a late, late free from Brendan Nelis secured a relay for Ardara.

Ardara had led by five points at one stage in the second-half, but Naomh Conaill inspired by county Anthony Thompson powered back to lead as the clock ticked into injury-time.

However, Ardara had the final say, and in doing so forced a replay with their neighbours which takes place tonight at Mac Cumhaill Park, Ballybofey.

The prize for the winners is a semi-final showdown with current Donegal SFC holders Glenswilly this weekend.

The last time the pair met before this year’s Donegal SFC was in 2009.

That game also went to a replay, and in the replay extra-time had to be played to separate the sides.

Naomh Conaill eventually edged Ardara out after extra-time, but it was one hell of a battle.

You wouldn’t bet against extra-time being required for tonight’s clash between the old rivals.

Paddy Campbell’s side will head into tonight’s clash again as slight favourites, Anthony Thompson, Leon Thompson, and Dermot Molloy will all be key players for Naomh Conaill tonight.

Kenneth Doherty was the best player on the pitch last Saturday, and Ardara will need him to exert his influence over the game again tonight.

While the likes of Paddy McGrath, Gareth Concarr and Martin Shovlin will also be expected to play significant roles.

Glenties should edge it though, although this game could go to extra-time again.