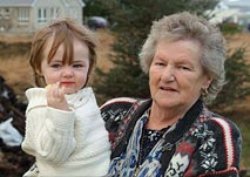 The mother of missing Mary Boyle has revealed she knows the man who has been arrested by Gardai in connection with her daughter’s disappearance.

Ann Boyle with one of her grandchildren. Pic courtesy of RTE.

Ann Boyle revealed how she knew the man growing up in Cashelard outside Ballyshannon where her six year old daughter went missing in 1977.

The 64 year old was arrested in the Midlands yesterday and is being quizzed at Mullingar Garda station.

Speaking from her home in Keadue, Ann revealed how Gardai has made her aware some weeks ago that they were close to arresting a man.

“The Gardai told me who he was and that they were close to arresting him.

The Gardai have always been very kind and courteous to me.

“They telephoned me this morning to tell me they were about to arrest him.

“I know him from growing up in Cashelard when I was younger,” revealed Ann.

Ann said she hopes the man can give Gardai the information they need to finally solve the mystery of her daughter’s disappearance 37 years ago.

And she said she still does not know if her daughter was killed or if she is still alive.

“I live with the hope that she is alive. Afterall not a ribbon or anything else was found belonging to Mary so she could still be alive.

“If she is dead then I just want her back to give her a Christian burial. That is all I want in my life now,” she said

Ann revealed that she was only in the area where her daughter missing a week ago.

“I’m often up there because that’s where my family come from. I was there a week ago.

“I just hope that perhaps I can go there someday when Mary has ben found,” she said.

Ann revealed that life has been difficult since her daughter vanished without a trace.

“I pray every day and that’s the only thing that gets me through it,” she added.

She also revealed how her late husband Charlie, who drowned in a fishing accident in 2005, aged 62, would have been so hopeful now that there has been a breakthrough in the case.

“Charlie was my rock and he helped me get through everything after Mary went missing.

“I just hope we can find an end to this now. It’s all that he ever wanted,” she added.