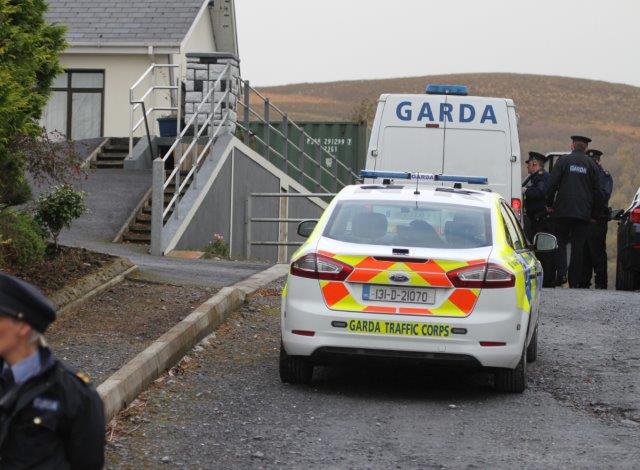 Detectives outside  the home where a husband and wife in their 70’s were found dead this morning. Pic by North-west-newspix.

MURDER squad detectives are investigating a double killing this morning in Carndonagh.

It’s understood a man and his wife have died as a result of the incident.

A man has been arrested at the scene.

It’s understood Gardai are investigating the possibility that the couple died as a result of multiple wounds.

There is widespread shock in Carndonagh.

The dead couple are well known in the area.

A priest has been called to the house to give the last rites.

A man was detained by Gardai who were called to the scene. The house has been sealed off and the office of the State Pathologist has been informed.

Gardaí have just issued the following press statement in relation to the incident.

Gardaí in Buncrana are investigating all the circumstances surrounding the discovery of a man and woman in their 70’s at their home in Carndonagh shortly after 9am this morning.

A short time later a man in his 40’s was arrested and he is currently being detained at Buncrana Garda Station under the provisions of Section 4 of the Criminal Justice Act 1984.

The scene is currently preserved pending a Garda forensic examination.

The office of the State Pathologist has been informed and investigations are continuing.