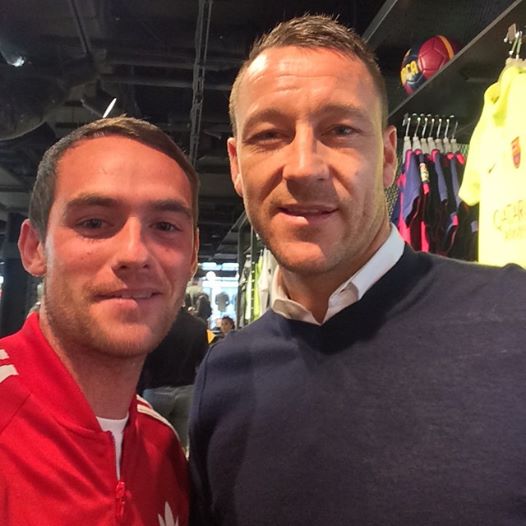 Former St Eunan’s star Ciaran Greene admitted he was star struck when he bumped into Chelsea captain John Terry whilst shopping in London.

Greene is well known in GAA circles in Donegal from representing St Eunan’s and Donegal.

Greene was also a talented soccer player and had spells in the League Of Ireland with Sligo Rovers and Finn Harps.

Greene won four Donegal SFC titles with St Eunan’s, but was forced to emigrate to England in search of employment last year.

Greene admitted he’s a big fan of Terry and regards him as one of the best defenders to ever play in the Premier League.

So when he spotted him today, he took the opportunity to get his photo taken with him and have a chat with the controversial former England skipper.

Greene said, “Big JT is a top guy, and he’s actually a big GAA fan since its introduction on Sky.

“He wasn’t aware of our British semi-final this week, as I asked him did he follow the progress of the North London Shamrocks GAA team?

“He said he didn’t, but did admit he’d love to play a bit of GAA someday since watching it on Sky.

“He’s not too sure of the rules, but maybe when he hangs up the boots at Chelsea, we might tempt him to turn out for us.

“He’d do a job somewhere on the pitch, but he’d have to cut out that crying that’s he fond off doing, there’s no place for that in the GAA.

We wish Greene and his colleagues all the best ahead of their British semi-final this weekend.