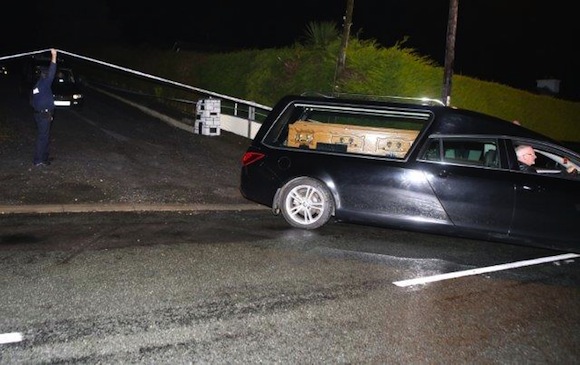 The removal of the remains of Jimmy and Kathleen Cuddity from their Carndonagh home last night. Pic copyright of North West News Pix.

Jimmy and Kathleen Cuddity were found dead at their home in Churchtown just after 9am.

The man is due to be released around 6pm following a number of breaks during his planned 24 hour period of detention.

He is being questioned under Section 4 of the Criminal Justice Act and is being interviewed at Buncrana Garda station.

Nobody else has been arrested in connection with the deaths.

Among the items recovered at the scene was an axe.

The couple, who were in their 70s, are survived by their four grown-up children including sons Julian, James and daughters Delila and Maureen.

Jimmy was originally from Kilkenny, but had lived in Donegal for decades wife while Maureen was from the area.

The dead man was a maths and technology teacher at Carndonagh Community School.

Cllr McDermott (FF) was a past pupil of Mr Cuddihy.

“Like everyone else I am just numb and in shock at what has happened in Carndonagh today.

“They were a lovely, quiet couple with a lovely family. For something like this to happen is just surreal. It’s like a dream.

“I was a pupil of Mr Cuddity for three years and he was a lovely man and a very good teacher.

“They were a very respected family and our hearts just go out to them at this time.

“You hear of things like this happening in big cities but not in a place like this in rural Ireland.

“Anybody I have spoken to just cannot believe it either.

“But this is a very tightly-knit community and we will gather around the family at this time,” he said.

Staff at the popular Tul na Ri Bar in Carndonagh are devastated as Jimmy would have called their most days.

“Jimmy was a really lovely man. I didn’t know his wife at all.

“He would come in most days and would have a wee whiskey and a chat or sometimes he would just have coffee.

“He gave me maths grinds and he was a really good teacher. It’s just awful that something like this has happened,” said a member of staff at the bar.

Gardai were posted at both entrances to the house on the Buncrana Road yesterday, which is about 500 yards from the town.

A garda cordon was lifted occasionally as distraught relatives arrived at the scene – the sound of loud weeping breaking the silence on the country roadway.

A young man left a floral tribute at the entrance to the house just before noon.

People passing the scene on foot and in cars blessed themselves.

At around 2pm four detectives arrived at the scene of the murders.

He attended the scene as local priest Fr Con McLaughlin is away in Spain on holidays.

After spending a period of time inside the house, Fr McLaughlin emerged and briefly addressed reporters.

“This is a great tragedy and a great loss. Our thoughts and prayers are with the family at this time,” he said.

It is believed the family all attended a recent family wedding and nothing suggested there was anything wrong in the house.

Another neighbour, who asked not to be named, said she saw Mrs Cuddity at mass at the weekend.

“She was a quiet lady and she was at mass as usual. They were in their twilight years and it’s just so sad to think that their lives were ended in this way,” she added.

MAN STILL BEING QUIZZED AFTER DISCOVERY OF BODIES OF ELDERLY COUPLE IN CARNDONAGH TRAGEDY was last modified: October 24th, 2014 by Stephen Maguire