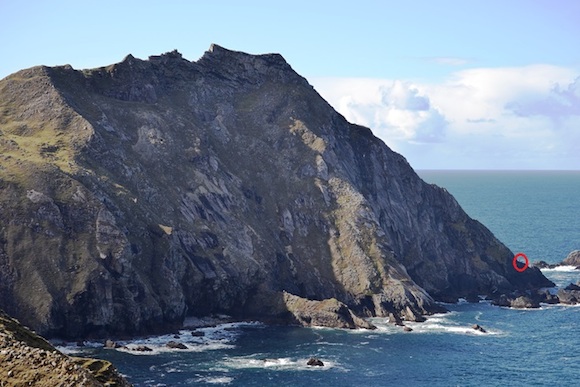 BY IAIN MILLER: In this first article on the Donegal great outdoors, hidden gem series I have chosen a little known but truly outrageous sea cliff feature in a lonely and seldom visited stretch of the Co. Donegal coastline to look at.

The view from the summit of the Sturrall Headland

The Sturrall Headland is one of the most outstanding sea cliff features in Ireland it is a true monster of a headland sitting isolated and far removed from the real world. The Sturrall lives on the lonely stretch of coastline between Glencolmcille Village to the South and the Port road end to the North. The headland is actually a 200 meter high sea ridge which juts out into the Atlantic for nearly a kilometre from mainland Donegal. The ridge can be easily viewed from mainland Donegal by following the sli Cholmcille marked path starting from An Chloghan in Glencolmcille or from the Port Road end to the north.

Looking back at Donegal from Sturrall summit

A visit to this stretch of coast line provides the walker with an unlimited vista of 1000 foot sea cliffs dramatically falling into the open ocean below. The views along this seaboard, stretch from Malinbeg to the south to Tormore Island to the north. Scattered along this coast you will discover a large collection of worldclass sea stacks each facing the might of the open untamed Atlantic ocean below. Along the cliff tops and on the ledges below live a huge and secretive aviation society of ground nesting Razorbills, Guillemots, Skuas and Fulmars. The Fulmar being a highly territorial sea bird who spits semi-digested fish oil at anyone getting too close to its nest. If walking this coast a visit to the Glencolmcille Folk Village at the start of the walk is an excellent opportunity to visit the history and unique culture found in this area.

View of the Sturrall from North (climbers circled)

View of Sturrall Headland from the South

For visiting rock climbers the Sturrall provides the longest recorded rock climb in Ireland. The first recorded rock climb to the summit of the Sturrall was by WP (Walter Parry) Haskett Smith in about 1890. His route ascended the skyline ridge from the landward side and provides a very exposed 350 meter mountain ridge scramble to this excellent summit. This route to the summit can be easily seen from anywhere on the cliff tops along this coastline. In 2012 two visiting American climbers and I gained the seaward tip of the ridge and climbed the knife edge ridge from sea to summit. The Sturrall Headland is the longest rock climb in Ireland with 700 meters of airy ridge climbing in a very remote, committing and scary location.

The summit of the Sturrall Headland is an extremely inaccessible and foreboding place to visit with steep 200 meter drops either side of you into the ocean below.   The ridge is climbed in two very distinct parts. The first being from sea level to the summit which follows a knife edge ridge. The second half is an airy scramble along the ridge towards land, from the summit follow the ridge past several towers and maximum exposure for approximately 350m of outstanding alpine ridge climbing back to land. (Hasket Smith 1890)