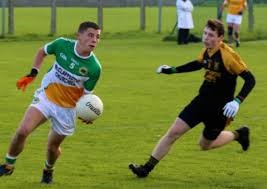 Oisin Crawford was the unlikely hero for Glenswilly, as they defeated Naomh Conaill to advance to the Donegal SFC final.

Late points from Oisin Crawford and Eamon Ward deep into injury-time were enough to edge Glenswilly into their third Donegal SFC final in four years.

Crawford was only on the field a matter of seconds when he pointed a wonderful long range score to edge Gary McDaid’s side back in-front.

He replaced Ciaran Bonner who was black carded for a cynical foul on Dermot Molloy.

Crawford showed great quality and composure to edge Glenswilly ahead deep in stoppage time after Dermot Molloy looked like he’d brought the game into extra-time when he levelled on sixty minutes.

Naomh Conaill searched for an equalizer, but then lost possession and full-back Eamon Ward ensured Glenswilly’s passage to the final when he knocked over after being released by Gary McFadden.

A goal opportunity was on for Ward but he sensibly took his point to send Glenswilly through.

The game was played in atrocious weather conditions, with heavy rain and a strong wind affecting play for the entire match.

In truth, despite the exciting finale, the game was littered with mistakes throughout, with handling seeming to be the biggest problem for both sides.

Both teams set up defensively and it ultimately resulted in a dour game of football.

Anthony Thompson got Naomh Conaill off to a flyer when he pointed over in the opening minute after good play for Dermot Molloy.

Glenswilly then took a stranglehold of the game and scored three fine points from play, with Caolan Kelly, Michael Murphy and Brian Farrelly all registering scores.

Naomh Conaill hit back with a great point from the impressive John O’Malley.

However Paddy Campbell’s men then survived a major fright, good play from Farrelly and Murphy presented an opportunity for Gary McFadden, his shot was blocked but the ball fell perfectly for Ciaran Bonner.

He had the simplest of tasks to tap in, but he blasted the ball and his effort sailed over the bar for a point when the goal was gaping.

Dermot Molloy added a free for Glenties just before half-time to leave a point between the teams at the interval.

Murphy registered Glenswilly’s first point of the second-half when he scored a fantastic free from out near the side-line.

Molloy hit back for Naomh Conaill with a superbly executed effort shortly after, Gary McFadden and Dara Gallagher then exchanged frees.

Another superb effort from Murphy edged Glenswilly two ahead, but a Molloy free and a great effort from Brendan McDyer levelled the game.

Glenswilly went back in-front with a few minutes to go when Gary McFadden pointed from a free and that score looked like it would be a decisive one.

Then Glenswilly had Caolan Kelly black-carded for a poor challenge on Leo McLoone.

Naomh Conaill patiently worked the ball about the Glenswilly 45 before releasing Molloy who pointed superbly to level the match.

It looked like the game was heading to extra-time, first Bonner was black-carded for a cynical challenge on Dermot Molloy.

He was then replaced by super-sub Oisin Crawford he pointed a wonder-score shortly after his introduction which rattled Naomh Conaill.

They desperately searched for an equalizer but they lost possession, and Glenswilly counter-attacked at pace, and it the game was sealed by rampaging full-back Eamon Ward.

He knocked over to put two between them, and from the resultant kick-out referee Jimmy White blew his final whistle.

Glenswilly now advance to the Donegal SFC final where they will face local neighbours and bitter rivals St Eunans.