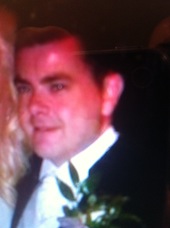 The town of Raphoe has been plunged into mourning following yesterday’s tragic road accident which claimed the life of one of its most popular young residents.

Hugh Shalvey was killed when his motorbike struck a jeep and trailer at Oakfield Demense around 4pm.

The 35 year old, who was originally from Co Monaghan, was married to well-known local woman Edel O’Donnell who works with Donegal County Council.

The couple had only married two years ago and are extremely well-known in the area.

Mr Shalvey was a lift mechanic and was described as “one of the most decent guys around” by a friend last night.

Local county councillor Frank McBrearty Jnr told Donegal Daily that his thoughts and prayers and that of the entire community were with the Shalvey and O’Donnell families.

Hugh was the son-in-law of boxing stalwart Peter O’Donnell.

The road where the accident happened remains closed this morning as Garda accident scene investigators arrived to carry out an investigation into the crash.

A family friend said Hugh was one of the most modest and decent young men about.

“You just couldn’t have got better. He was a modest and decent young fella.

“There was no harm in him and he was forever helping people out in his own quiet way.

“People still can’t believe that this has happened,” he said.

Donegal Daily would like to extend out sincere sympathy to both the O’Donnell and Shelvey families at this time.