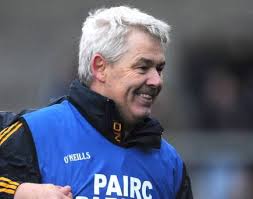 EXCLUSIVE: PADDY CARR RULES HIMSELF OUT OF RUNNING FOR DONEGAL JOB

Paddy Carr has ruled himself out of the running to replace Jim McGuinness as Donegal manager.

Paddy Carr has ruled himself out of the running to replace Jim McGuinness as the new Donegal manager.

Carr was nominated for the vacant position by Fanad Gaels after expressing an interest in the vacant role.

Carr has a hugely impressive CV, and notably led Kilmacud Crokes to a Dublin SFC title and also to a provincial crown during his time in charge.

However, its since emerged that when the details of the commitment required for the job were relayed to Carr, he felt it wasn’t feasible or manageable with his current work commitments.

Carr is a native of Fanad, but resides in Drogheda, and would have to travel up to Donegal at least four times a week for training.

Rory Gallagher has been the hot favourite to succeed McGuinness who parted from the Donegal job after four seasons at the helm.

From the get-go Gallagher has been the favourite, but in recent days support for Carr had grown, but its now been announced he’s opted to withdraw from the race.

Anthony Harkin and Cathal Corey are the other two candidates, but both are considered ‘rank’ outsiders to succeed McGuinness.

Corey worked with McGuiness at Naomh Conaill, and was a hugely popular and successful manager during his tenure in Glenties.

He famously lead them to an Ulster club final in 2010 which they narrowly lost to Crossmaglen.

However, it looks almost certain that Rory Gallagher will be unveiled as the new Donegal manager tomorrow night.

EXCLUSIVE: PADDY CARR RULES HIMSELF OUT OF RUNNING FOR DONEGAL JOB was last modified: October 30th, 2014 by Mark Forker