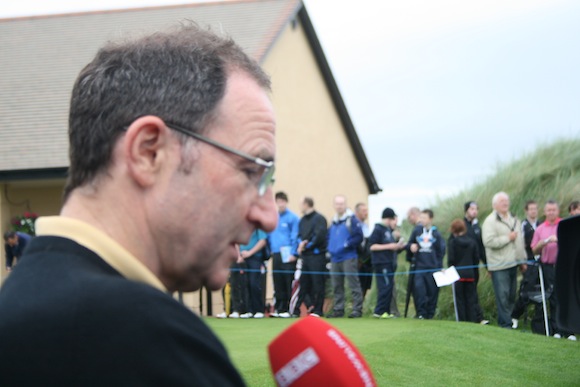 Martin O’Neill was surprised at how quickly Seamus Coleman and James McCarthy returned to club action after missing Ireland Euro 2016 double-header with Gibraltar and Germany.

Ireland manager Martin O’Neil has expressed his surprise at the speed in which Seamus Coleman and James McCarthy returned to action for Everton after missing Ireland’s Euro 2016 double-header.

The influential duo missed Ireland’s double-header against Gibraltar and Germany through injury.

However, the Everton pair were fit to play the full 90 minutes for their club just THREE days after Ireland’s crucial qualifier against Germany.

John O’Shea scored in the fourth-minute of injury-time to secure a famous result.

O’Neill has expressed his surprise at the speed in which they returned, but said he was prepared to give both players the ‘benefit of the doubt’.

O’Neil said, “I thought the two of them playing three and half days after a match we have deemed really important, I would maybe have had some concern.

“But I’m prepared to give the benefit of the doubt.

O’Neill has named both players in the squad for the forthcoming qualifier against Scotland in a fortnight’s time.

The game is a crucial encounter for both sides, and another positive result for Ireland would see them take a giant step towards qualification for the tournament in France.

O’NEILL PREPARED TO GIVE COLEMAN AND MCCARTHY ‘BENEFIT OF THE DOUBT’ was last modified: October 30th, 2014 by Mark Forker