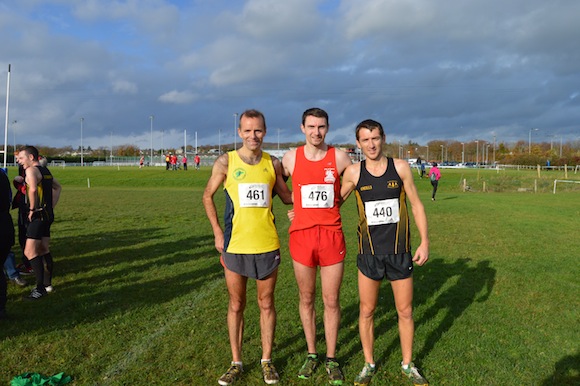 The sun was shining, the course was in perfect condition and with Donegal’s best distance athletes turning out, the stage was set for a thrilling Donegal Senior Cross Country Championships at the Finn Valley Centre in Stranorlar.

With the Donegal Seniors one of the most fiercely contested Championships in the country, yet again this years event did not disappoint with the large crowd in attendance treated to two brilliant races.

The mens race was run over 10km and what a race this was. In a start studded field which included the likes of four times World Cross Country athlete Pauric McKinney, and European and World athletes such as Ruairi Finnegan, Ciaran Doherty, Darren McBrearty and Danny Mooney, this was a race which had the crowd literally on the edge of their seats from starts to finish. Mid way through the race, Letterkenny athlete Ruairi Finnegan took the lead followed by Inishowens Pauric McKinney and City of Derry’s Conor Bradley in third. Indeed, Finnegan looked to be in control of the race until he was forced to retire with two laps to go. This left a battle between McKinney who completed a 2.33 marathon only six days previously, Bradley, and Letterkenny’s Ciaran Doherty who ran a smart race to come through the field as the race progressed. Going into the last lap, McKinney had about 50 meters on Bradley, but with about 600m to go, Bradley surged past McKinney and came home to an impressive victory, with McKinney finishing second and Doherty third.

While the individual race was exciting, the battle for the team honours was between old rivals Finn Valley and Letterkenny with Inishowen also showing strongly. With Finnegan leading the field, Letterkenny were ten points clear and looked to be about to reclaim the team title from last years winners Finn Valley. However, with Finnegan retiring, this placed a strong Finn Valley team in pole position. With some tremendous individual battles throughout the field and every position fought for, it was Mark Connolly’s men who took the team title, with the Letterkenny men settling for second and Inishowen third. 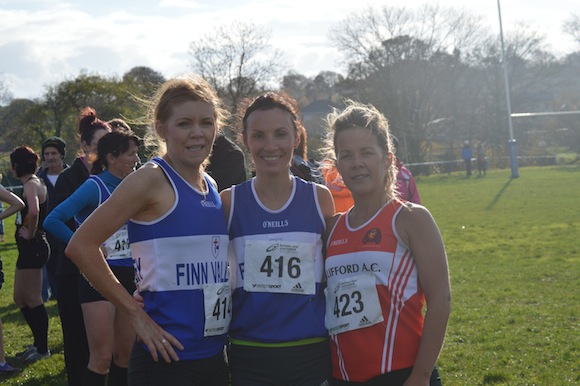 While the mens race provided plenty of excitement, the ladies race was a master class in distance running by Finn Valley’s Teresa Doherty. The Valley girl led the race from start to finish, having opened up a gap between herself and team mate Caitriona Devine and Lifford’s Claire McGuigan early in the race. Doherty’s victory was a record 7th individual title for the Valley girl and no doubt a happy Doherty household this evening, with husband Ciaran third in the mens race.

While Doherty led the way, it was an interesting battle between Devine and McGuigan, a Donegal Novice winner in recent years. Over the 5k course, Devine tried to break from McGuigan, with the Lifford girl dogged in her determination to fight a battle for the silver and bronze right to the end. With one lap to go, Finn Valley’s Catherine Dooher started to close the gap from fourth to third which provided for an exciting final lap. In the final lap, Devine broke free from McGuigan and raced home to take a deserved silver medal, with McGuigan holding off the late Dooher challenge to take a bronze medal, her first medal at this level.

The womens team race was a three way battle between the host club Finn Valley, Inishowen and Lifford AC. The Finn Valley record for team titles is second to none, having won it on forty occasions previously. This bunch of Valley athletes continued a great tradition taking a 41st title, with the ever improving Inishowen club taking second, and Lifford AC in third.

Also running today was Anne Marie McGlynn, who used the mens race as a training run for the forthcoming Inter Counties, where selection to the European Cross Country team is in her sights for the second year in a row. The Letterkenny AC athlete ran impressively, with her recent spell at warm weather training with the Irish team standing her in good stead.

Speaking at the presentation after the event, County Chairman Brendan O’Donnell praised the athletes and their clubs for such an excellent show case of the County’s premier Cross Country event. With a running boom throughout the country, O’Donnell also acknowledged those athletes who have progressed from recreational running to competing at quality events such as this. O’Donnell also thanked the Finn Valley club for the hosting of the event on an excellent course and acknowledged the sterling work of the ever present Brendan McDaid and Neil Martin for their race organisation.

Next up for these Donegal athletes will the Inter County Cross Country Championships in Dundalk at the end of the month, while others will be taking part in the Ulster Novice next weekend. A great day’s athletics to round off the Donegal Cross Country calendar for this year, with all roads now pointing towards Provincial, All Ireland, and International events over the coming weeks and months.