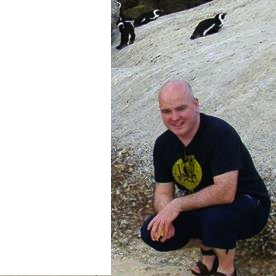 This is the tragic Co Donegal businessman whose death is being probed by Gardai after a housefire.

Optician Jeffrey McLaughlin, 42, was found dead outside a house at Malin Head in the early hours of Saturday.

The popular father-of-three, was from Carndonagh on the Inishowen Peninsula, but lived in Derry.

He was a well-known member of the local sub-aqua club.

The fire was first spotted at the house in the townland of Carnmalin just after midnight.

Fire tenders from both Carndonagh and Buncrana Fir station rushed to the scene.

However Mr McLaughlin’s body was found outside a period later.

Specialist Garda forensic officers from Dublin arrived at the scene yesterday to carry out a full investigation into the cause of the fire.

Gardai at the scene of the housefire at Carnmalin yesterday. Copyright Northwest News Pics.

Locals have reported hearing a loud explosion around midnight.

The house was badly damaged in the fire with the roof and masonry completely destroyed.

One theory is that gas canisters used by Mr McLaughlin during his diving pastime may have exploded.

The State Pathologist is due to arrive on the scene to carry out a full post mortem.

Specialist forensic officers could be seen sifting through the wreckage of the blaze today.

Meanwhile Gardaí are appealing for witnesses or anyone with information on the fire and particularly those who were in the Carnmalin/Malin Head area between the hours of 8pm and midnight on Friday 31st October 2014, to contact them at Buncrana Garda Station on 074 9320540, or on the Garda Confidential Line 1800 666111 or any Garda Station.