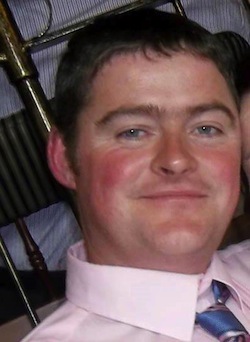 A father-of-three, who died in a car crash in Redcastle last night, was just a few hundred yards from his home when the crash occurred.

The man, named locally as John McGonagle, died when his car struck a ditch at Clar, Redcastle around 11.30pm.

The popular family man was pronounced dead at the scene after his Ford Mondeo car went out of control on the Inishowen Peninsula.

The area of the accident has been sealed off and a full forensic examination is being carried out into the possible cause of the crash.

The popular married dad of three young girls was well-known in the area and was heavily involved in stock-car racing.

Tributes have been flowing in on social media for Mr McGonagle whom many described as “a real gentleman.”

The 37 year old is the third person to die on Donegal roads in less than five days.

Last Wednesday a 34 year old man was killed when his motorcycle crashed into a jeep towing a trailer on the outskirts of Raphoe.

Hugh Shalvey, who was originally from Co Monaghan, died instantly at Oakfield Demense.

The scene of last night’s road crash in Redcastle in which a young father died. Copyright Northwest News Pix.

And on Friday night last, another motorcyclist in his 50s was killed when he was involved in a collision with two other cars.

Lenny Nelson, a theatre technician, from Cullion Road in Letterkenny, was killed following the accident at Lisfannon Road in Burt.

Garda Inspector David Murphy of Buncrana Garda station, appealed for anybody who may have witnessed the Ford Modeo car involved in the latest road fatality to come forward.

“We would appeal to anyone who may have been in the Redcastle area at the time and saw this Ford Mondeo car to come forward,” he said.

POPULAR FATHER-OF-THREE WAS JUST SHORT DISTANCE FROM HOME WHEN HE CRASHED was last modified: November 4th, 2014 by Stephen Maguire