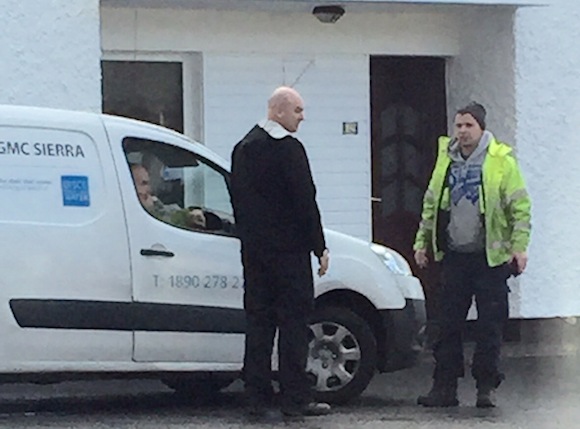 A county councillor is encouraging the Donegal public to stand on or drive their cars over manholes to stop Irish water installing meters.

Independent councillor Micheal Mac Giolla Easbuig made the call after seeing off an Irish water team in West Donegal today.

The workers from the GMC Sierra company, who are contracted to Irish Water, called to a number of villages including Meenaleck, Annagry, Crolly and Loughanure in a bid to fit water meters.

But Cllr MacGiolla Easbuig stood over the meters and refused to move.

The workers called their supervisors who told them to continue working but Councillor MacGiolla Easbuig refused to move.

He told the workers he did not want confrontation but was refusing to move.

The workers again called their supervisor and he informed the men to move out of the area.

The Independent councillor told Donegal Daily he has nothing against the workers but his gripe is with the Government and Irish Water.

“I have nothing against these men personally and I appreciate they are only trying to make a living but we are opposed to what they are doing.

“If that means standing on manholes or driving our cars over them to stop this work, then so be it,” he said.

Cllr MacGiolla Easbuig said he was encouraging other councillors to take a similar hardline stand against the installation of water meters.

“We need to stand together on this issue and the likes of Fianna Fail need to come out and stand by the people and let them know where they stand on this issue.

“If we can stop Irish Waters from installing water meters then we can stop them trying to push this charge through on us,” he said.

COUNCILLOR CALLS ON PEOPLE TO DRIVE OVER OR STAND ON MANHOLES IN WATER DISPUTE was last modified: November 4th, 2014 by Stephen Maguire