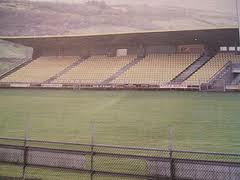 O’Donnell Park in Letterkenny will host the Ulster SFC clash between St Eunan’s and Roslea.

St Eunan’s have received a timely boost ahead of their Ulster SFC clash with Fermanagh champions Roslea this Sunday.

The game had been originally been scheduled to be played at Mac Cumhaill Park.

However, St Eunan’s home venue O’Donnell Park meets the criteria for hosting such games so St Eunan’s were able to move the tie to their home pitch.

Maxi Curran will be hoping his side can make an impact in the Ulster championship.

St Eunan’s have failed to make an impact in Ulster despite their dominance in Donegal over the last decade.

St Eunan’s will be fancied to overcome Roslea on Sunday, but it will be a very difficult game.

The game gets underway at 2.30pm at O’Donnell Park this Sunday.