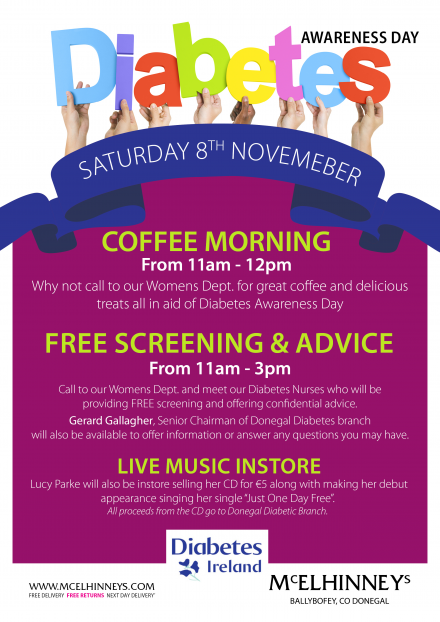 McElhinneys Department Store will be holding an awareness and fundraising day for the Donegal Branch of Diabetes Ireland.

The fundraising events takes place this Saturday, the 8th of November and a large crowd is expected to descend on the popular store to support such a great cause.

In-store there will be lots of great activities to raise awareness and fundraise for Diabetes Ireland.

Diabetes Ireland is very close to McElhinneys heart, as one of their valued team members has a daughter Lucy Parke (13) from Raphoe who has been suffering with diabetes since she was three.

Lucy has been involved immensely in raising funds over the last few years, in September this year Lucy wrote the song “Just One Day Free”, the song is about living with diabetes and how it won’t stop her following her dreams.

Lucy’s CD has been a great success and has raised such vital funds for this charity.

• From 12pm Gerard Gallagher who is a senior Chairman of Donegal Diabetes branch will be available to offer information or answer any questions.

• Lucy Parke will also be instore selling her CD for €5 along with making her debut appearance singing her single “Just One Day Free”. All proceeds from the CD go to Donegal Diabetic Branch.

Come along for great coffee and delicious treats and get your diabetes screen free of charge.

All proceeds on the day will go to the Donegal Diabetic Branch.

This promises to be a great day, with lots of fun activity and all for such a worthwhile cause.