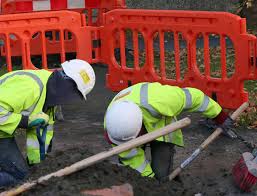 A DONEGAL family says they were left gobsmacked after Irish Water workers dug up their drive – and then left, leaving the gaping hole behind them.

The incident – in Castlefinn – has caused anger in the area.

Cllr Gary Doherty, who has spoken to the family, has said the actions of the company were “completely unacceptable”.

He told Donegal Daily: “This hole was dug this evening (Friday) while the family were at work and unable to protest about it.

“They have left a hole three foot deep in front of the entrance to their property. They are unable to drive their cars into the house. It is also unsafe for children to play outside because of the dangers posed by this hole.”

He added: “To leave their property like this as they arrived home to begin their weekend is completely unacceptable. Most people are totally opposed to the instalation of these meters at all, so to find a mess like this is disgraceful.

“I have made an official complaint to Irish Water over this issue.”

ANGER AS IRISH WATER DIG UP FAMILY’S DRIVEWAY – AND THEN LEAVE was last modified: November 7th, 2014 by John2