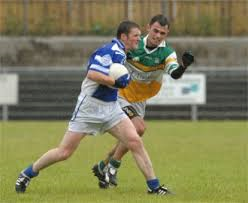 Buncrana and Cloughaneely face-off tomorrow in the final of the Intermediate Championship Final at O’Donnell Park. (2.15 pm throw-in)

Both sides know that the winner of tomorrow’s final will also return to the Donegal SFC for next season.

Both clubs are ambitious, and have a playing pool capable of competing in the Donegal SFC.

There’s no doubt that both sets of players and management will be striving to secure that their clubs return to Senior football in 2015.

Buncrana go into only their fourth ever Intermediate Championship final, on the back of a thoroughly impressive Championship showing.

David McConnell’s side came out of a tough group, drawing away from home with Milford, before home wins over local neighbours Carndonagh, and Naomh Columba, from which they clawed back an eight-point half-time deficit.

In the quarter final, the Inishowen side managed to overcome St Naul’s after a replay, in a pulsating game of football in Convoy on Tuesday last.

And with the thick-and-fast nature of Championship football, they faced Naomh Bríd just four days later in the semi-final, where a virtuoso performance from captain Odhran Doherty inspired them to a two point win.

Buncrana go into the final, with effectively a clean bill of health – bar the absence of Donegal minor star Caolan McGonagle, who misses the game with a knee problem.

However, McConnell is able to call on several players with inter-county experience, most notably Darach O’Connor, who is beginning to hit the form which enticed Jim McGuinness to include the youngster in his senior side earlier this year.

The likes of John Campbell, Garbhan Friel, Kevin O’Loughlin and Joseph McGrory will also play key roles for Buncrana, in what is a well balanced squad.

The youth of Bruce Waldron, Stephen Doherty and Peter McLaughlin, is complemented by the experience and know-how of the ‘X’ brothers, Odhran and Oisin Doherty, Oisin O’Flaherty, Simon McGrory and goalkeeper Gavin Cullen.

Manager McConnell has expressed his delight at his squad’s showing in this year’s Championship, and has said that had it not been for players’ work and education commitments, that the club’s under-achieving position in this year’s Division 3 could well have been improved.

One thing is for certain, is that despite their underdog tag, Buncrana will be going into this encounter with every intention to preserve their recent form, and have the quality in-depth to get the win.

Cloughaneely were relegated last season from the Donegal SFC but they’ve responded in emphatic fashion.

They’ve consolidated their position in Division Two, and are looking to seal a swift return to Donegal SFC football with a win on Saturday.

In this year’s championship Cloughaneely have been in brilliant form, and their victory over Fanad Gaels in the semi-final was particularly impressive.

Cloughaneely have blooded a number of quality young players this season, with John Fitzgerald looking like a real star of the future.

He posted 1-5 against Fanad Gaels and forms a formidable and menacing inside forward line with the talented John McGarvey.

Denis Boyle, a veteran at this stage is still a massive player for Cloughaneely and former Donegal U21 star Kevin Mulhern is a pivotal player for Joe McGarvey’s side.

Joe McGarvey’s side have adapted well to life without star forward Shaun McGarvey and will be confident of victory tomorrow.

It promises to be a cracking final, and it will be a very close game, but Cloughaneely have that added extra experience and should have enough to get over the line.