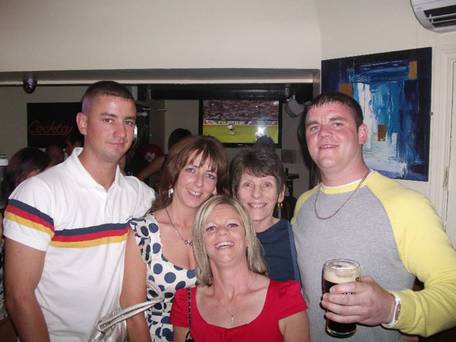 Stephen McCloskey, pictured on the right, with his family

THE FAMILY of a missing man have issued a heartfelt plea to people in Donegal to help find him.

Father-of-three Stephen McCloskey (33) left his sister’s home in Ard Grange in Derry on October 28 but has not been seen since.

His Nissan Terrano 4×4 was found abandoned in Burt.

Searches for the missing man continued yesterday with the Garda deploying a helicopter.

His sister Lisa McCloskey has been putting up posters up around Donegal, hoping someone will recognise him

“We’re not good, we are getting worse now as the days go on,” said Lisa

“It’s getting worse. It’s unbearable what we are going through, we just want him home. I just hope someone in Donegal saw him.

“His partner Sinead is distraught. They have been together for 15 years. And the three children are missing him so much.

“We are just appealing for anybody to come forward with information, should it be the silliest wee thing or they don’t even think that it means anything, even if they think it could help in the slightest wee bit.

Family and friends have joined together along with volunteers from Foyle Search and Rescue to search the fields around Burt – a place that holds no association with Stephen.