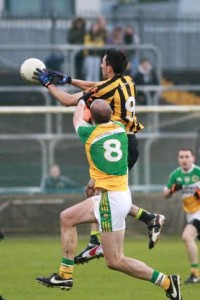 Mark Harte, the former Tyrone player and son of Mickey Harte, will be in Letterkenny today plotting to throw the Donegal county champions out of the Ulster Championship.

Harte is now in charge of Roslea who have had to wait completion of the Donegal championship.

He brings his team to O’Donnell Park to take on a resurgent St Eunan’s, now blessed with a mixture of youth and experience under the watchful eye of Maxi Curran.

Mark Harte says the six week wait for Eunan’s hasn’t affected his side.

“Since winning the county championship we have also gone on to win the league title and that not only got us another trophy but also provided us with a very competitive fixture,” he said.

“Since St Eunan’s were confirmed as Donegal champions last Sunday our lads have been raring to go.”

For Maxi, it has been a roller coaster seven weeks – a game in every one of the,.

“It’s been rewarding because the players have improved as we’ve gone on,” says the Na Dunaibh man.

“For Rory Kavanagh, this will be his eighth game in eight weeks when you factor in the All-Ireland final.

“Eamon Doherty was in the Donegal panel while we also have five of the county minor squad who lost the All-Ireland final so that’s a total of seven players who’ve had to quickly get over that disappointment and get refocused on the club.”

“Rory is playing the football of his life He has been phenomenal, he’s nearly been man of the match in all of the games and has been a huge factor in our success,” added Maxi.