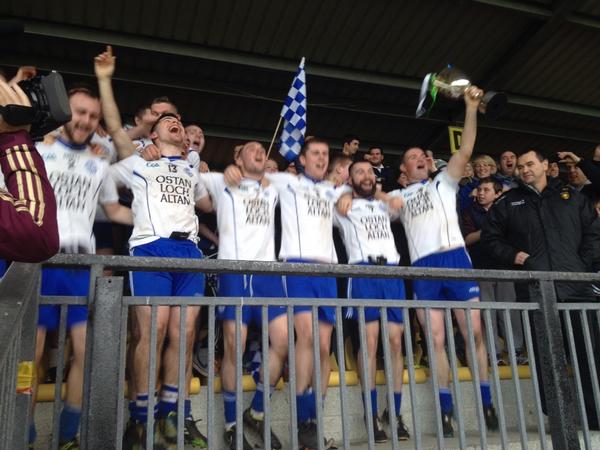 Cloughaneely have completed one of the most remarkable feats in their history following a ‘dream’ weekend for the club.

Cloughaneely defeated Buncrana yesterday at O’Donnell Park, the win also ensured that Joe McGarvey’s side will play in the Donegal SFC next season.

However, there was no time to celebrate their victory, as they had to play in the Ulster Intermediate Championship this afternoon.

Former Donegal GAA star Martin McHugh slammed the decision to force Cloughaneely to play the day after they won the Championship as ‘absolutely disgraceful’.

McHugh was commentating on yesterday’s final when he made the comments, but the injustice felt by Cloughaneely spurred them on today as they recorded an incredible victory.

Trailing by six-points at half-time, Cloughaneely remarkably fought back and led by one point with a minute to go, but Castledawson had the final score and forced extra-time with the sides levee 2-11 each.

Cloughaneely showed no signs of fatigue, and the resilience heart and determination on show from Joe McGarvey’s troops was inspiring.

You would’ve expected extra-time to be a bridge too far, but not for this Cloughaneely side.

Superb goals in either half from John Fitzgerald and John McGarvey kept Cloughaneely in-touch having had a dreadful start to the game.

After twenty minutes Cloughaneely trailed Castledawson by 2-04 to 0-02.

By half-time they had managed to cut the deficit to six-points thanks to a goal from the brilliant John Fitzgerald.

Cloughaneely kept plugging away in the second-half and refused to lie down, they had reduced the margin to two points and then a superb goal from the lively John McGarvey seen them lead by one point with one minute left.

Castledawsonstruck back to bring the game into extra-time thanks to an excellent point from Aidan McElhone.

Then in extra-time Cloughaneely took command, and remarkably showed unbelievable fitness, quality and character to get over the line.

Denis Boyle was superb and points in extra-time from him and Declan McGarvey eased them into a three-point lead, and incredibly that’s how it finished, 2-14 to 2-11.

However, in just over 24 hours, they’ve defeated Buncrana and also Derry champions Castledawson.