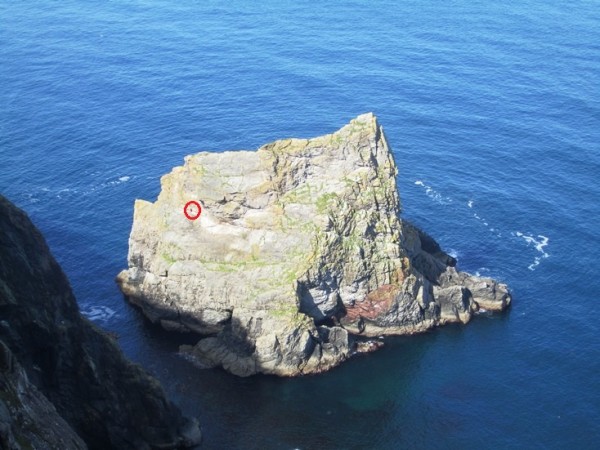 In this second article on the Donegal great outdoors, hidden gem series Ian Miller has chosen the little known and seldom visited ‘Dunaff Headland’ on the west coast of the Inishowen peninsula.

Living on a northwest tip of the Inishowen Peninsula is the 230 meter high Dunaff Hill.

This hill is hemmed in by Dunaff Bay to the south and by the lonely Rocktown Bay to the north, which in turn creates the dramatic Dunaff Headland.

The seaward face of the headland is a 4 kilometre stretch of very exposed outrageous sea cliffs running its circumference to a high point of 230 meters which overlooks the isolated sea stack Bothanvarra.

The Dunaff headland is a miniature mountain massif which sits marooned on the seaward side of the glacial flatlands containing Dunaff village.

With a thick red undergrowth of the fly eating Sundew and in the damp gullies a mini forests of insect eating Butterworts.

In many ways the headland is a botanist time capsule with many of the rarer Irish bog plants in residence.

What the headland provides the recreational walker is outstanding coastal views towards Fanad Peninsula and Fanad Head Lighthouse to the west and Malin Head to the north.

A highly recommended walk starts from the wee pier at Sudan Port and finishes on the b road at Dunaff Bay just beyond Colum Point.

This walk hugs the coast line by following the cliff top path and affords the walker unforgettable panoramas in all directions as far as An Grianan of Aileach over Leenan and Dunree Heads to the south.

What Dunaff head provides for the perhaps the more adventurous rock climber is a world class sea stack called Bothanvarra.

Bothanvarra is a 70m high chubby Matterhorn shaped sea stack which sits in the most remote, inescapable and atmospheric locations on the Inishowen coastline.

Access is by a very committing sea passage along the base of the unescapables or by a scary descent of one of the steep gullies overlooking the stack.

After four attempts Bothanvarra has only been climbed once by one person, so it is safe to say it is not yet a very popular rock climbing location.

But with a 50 meter high seaward face of currently unclimbed immaculate rock it is a future adventure climbers playground, with off course, suitably entertaining access issues.

Access to Bothanvarra requires mirror calm seas, no wind and mid summer sun as the stack sits so close to the overlooking cliffs that it is rarely dry.

What is guaranteed is it will receive several visits next summer and it sea ward faces will be explored by visiting rock climbers.