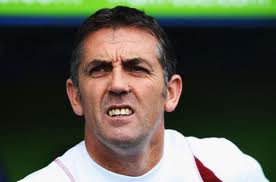 OWEN COYLE: ‘I HOPE McGEADY AND McCARTHY DON’T GET ANTI-IRISH HASSLE AGAINST SCOTLAND’

FORMER Ireland soccer star Owen Coyle says he understands why Aiden McGeady and James McCarthy chose to play for Ireland over Scotland – and hopes there isn’t an anti-Irish element in the crowd when the Republic take on the Scots at Celtic Park this Friday night.

Coyle’s mum Frances was from Gortahork and dad Owen Snr was from Gaoth Dobhair.

He was brought up in an area of Glasgow known as ‘Little Donegal’.

McGeady and McCarthy’s grandparents are also from Donegal; they chose Ireland over Scotland.

“James and Aiden will probably get some stick, but it should be because the supporters are simply upset that they chose to play for Ireland above Scotland and nothing else,” said Owen.

“The great thing about Scotland and Ireland is that both sets of supporters are known for being some of the very best in the world. People will be told to keep it decent if they do go over the score a little.

“I would like to think that anti-Irish sentiment is not a part of our modern society. I hope we have moved on, but it would probably be naive to think that there won’t be some people who come along to give them a bit of stick with something of an agenda. The main thing is that it doesn’t get vitriolic.

“With all due respect, I feel it would be slightly hypocritical [for Scotland fans] to get too serious about it all because there are players in the Scotland team who were not born in Scotland. It certainly won’t affect James or Aiden. To be involved in football, you have to have a thick skin and these guys are two terrifically talented players who would play in the Scotland team all day long.

“Supporters maybe aren’t aware of all the circumstances that lead someone to make such a decision either. It was a different era when I chose to play for Ireland and I think supporters who knew the game could understand it. I was fine. I didn’t get abuse. With the type of personality I had, I would like to think I would have been able to deal with it anyway,” he told The Herald.

OWEN COYLE: ‘I HOPE McGEADY AND McCARTHY DON’T GET ANTI-IRISH HASSLE AGAINST SCOTLAND’ was last modified: November 10th, 2014 by John2