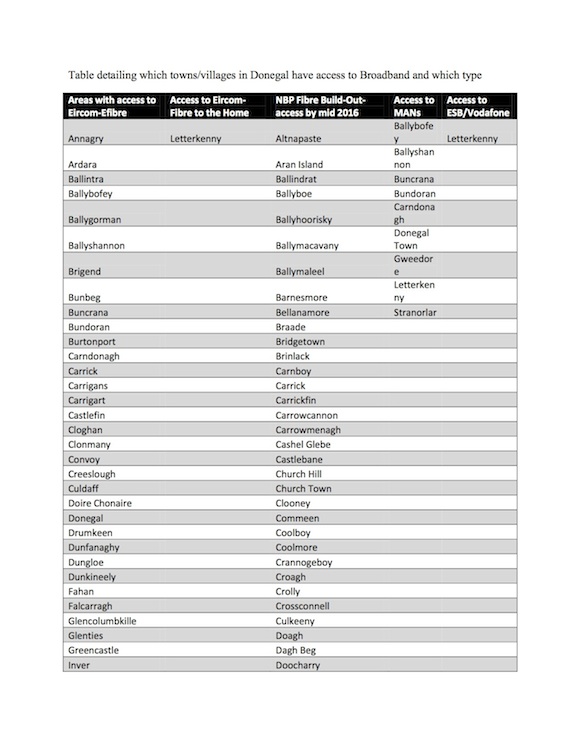 REVEALED: THE TOWNS AND VILLAGES GETTING FAST BROADBAND

JUNIOR Minister Joe McHugh has welcomed the release of a list of towns and villages (attached) which will get high speed broadband by the end of 2016.

However people living in the countryside will still struggle with shockingly bad connections for many more years to come.

Commenting on recent developments, Minister of State, Joe McHugh TD, confirmed: “I welcome the commitments by Eircom, ESB and Vodafone that they will provide almost 70% of addresses in Ireland with high-speed e-fibre broadband by the end of 2016.

“The Department of Communications, Energy and Natural Resources is working with Local Authorities to drive the commercial rollout of high speed broadband to an increased number of homes and businesses, where over 1million homes in Ireland are already benefitting from improvements.

“This Government is committed to a programme of activities which will help facilitate these developments, including addressing geographical and infrastructure challenges, most notably in rural areas, upgrading both business and consumer access and ultimately maximising the use of State assets where possible. These goals will ultimately result in 1.6million of the 2.3million addresses in Ireland having high-speed broadband by end of 2016, whereby an additional 66 towns across Donegal will benefit by 2017.

“The focus of these developments is to ensure we are not limited by speed or location and the projects will involve moving from copper lines to fibre cables. Placing fibre at the core of this strategy means that a solution will be delivered that will meet the needs not just for today’s generation but it will deliver infrastructure capable of serving demand for decades to come.

“The ability to encourage businesses to set up in rural towns and villages is heavily dependent on access to fast-speed, high quality broadband, and we need to ensure that the emphasis is placed on rural areas. Telecommunications companies are now shifting from cities and towns in urban areas to further afield across the country and this will have a very positive knock on effect on local communities. Not only will it offer younger generations the very real and attractive opportunity to stay in their communities and work, it will also help encourage young families from urban areas to move away from over-crowded services and a more expensive standard of living. This will lead to positive developments such as increases in school numbers, post offices, local services etc.”

REVEALED: THE TOWNS AND VILLAGES GETTING FAST BROADBAND was last modified: November 10th, 2014 by John2