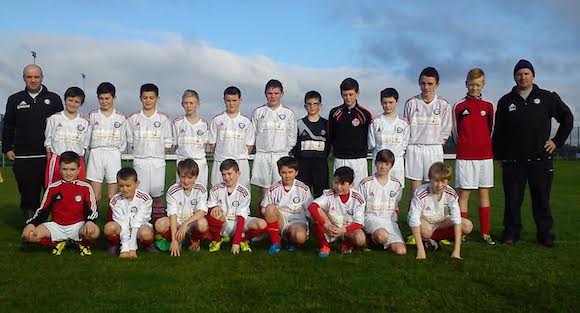 The winner of the €50 lucky ticket was John and Maureen Long, Cappry.

In this top of the table clash played in perfect conditions at Cappry Park, it was a game of very few chances.

Both sets of defences were on top in a very entertaining opening half with play swinging from end with no clear cut chances being created.

St Catherine’s started the strongest in the second half but the Cappry rearguard stood firm and keeper Eoin Gallen did well.

The visiting keeper made a few good saves when called upon.

The breakthrough came for the visitors in the sixty second minute when following a short corner the ball broke to a St Catherine’s player who broke, crossed to the wing and the ball was squared to Ryan McHugh who scored from close range to the corner of the net.

Cappry piled on the pressure in search of the equaliser but try as they did, they couldn’t find a way past the visitors defence and keeper.

They’re back on the road again next Sunday with a trip to Kildrum Tigers.

Kick off at 2pm in Kildrum.

The under 18’s played Keadue Rovers on Saturday and were on the wrong side of a 2-1 loss. Kevin Bonner got the Cappry goal.

No game next week.

This game was played in good conditions on Saturday morning. The home team started well and Sean McBride forced a good save from the Convoy keeper from a free kick. Cappry kept pressing looking for the opening goal but Convoy were solid at the back. Convoy were dangerous on the counter attack throughout the first half. It looked like the teams would go in level at half time but in the 39th minute the Convoy keeper made a fine save from a good strike from Luke Gavigan. From the resulting corner Oisin Gallen took a short corner to Daire McCafferty who crossed to Chad McShorley who scored with a fine header. Cappry started the second half well again and pressed looking for a second goal. They went close on a couple of occasions but had to wait until the 64th minute when Daire McCafferty found Jamie Keegan who made no mistake from 6 yards. Both teams kept looking for goals in the final 15 minutes. In the 73rd min Sean McBride was taking down in the box for a penalty but he blazed the spot kick over the bar. In the 76th min Karl McGlynn found Sean McBride but he saw his header cleared of the line. Two team performances. Ref Marty McGarrigle.

Next game is away to Carndonagh in the national cup. Saturday, 2pm kick off.

Cappry got a dream start in this when they got a penalty in the 2nd minute following a foul on Joel Bradley-Walsh. Joel Bradley-Walsh made no mistake from the spot firing low into the bottom corner. Drumkeen responded well to going behind and pressed hard to get back level. Cappry held out well but in the 21st minute Shaun Doherty got Drumkeen back level with a fine strike from the edge of the box. The rest of the first half was very even between the two teams with both playing nice football at times. The game carried on in this vein in the 2nd half with both teams looking to get back in front. It was Drumkeen who took the lead again when the lively Jason McDaid broke clear and made no mistake with his shot. Cappry pressed hard to get level but Drumkeen held firm and were dangerous at the other with Jason McDaid going close with a header for the away side. In the 60th minute Cappry got level through Joel Bradley-Walsh who controlled Kieran Neeson’s cross well before beating his man and firing into the bottom corner. Both teams tried to get a winner but neither team could find one but on the day neither team deserved to lose in what was a very entertaining game between two even teams. Two good team performances. Ref Marty McGarrigle.

Cappry’s next fixture is away to our near neighbours, Ballybofey Utd in the league. Game is to be played on Saturday in the Finn Valley Centre, 12.30pm kick off.

Cappry Crusaders dominated the 1st half and got their break through when Cody Laverty played a through ball which split the Bonagee defence, Daniel Gordon ran on to it and made no mistake with the finish to put Cappry 1 up on the 20th minute. Daniel followed that up with a similar chance but the keeper saved at the near post and put it out for a corner. Bonagee had a few chances but Daniel Crawford dealt with them easily. At the start of the second half Thomas McMenamin split the defence once again sending Daniel clear. This time he seen his shot rifle back off the crossbar and Bonagee cleared. Kyle Leeper came on 8 minutes into the 2nd half and made an immediate impact when he played a 1-2 with Odhran O’Donnell, he then passed the return ball into the bottom corner. In the 44th minute Daniel got the ball on the end line and he pulled it back to Odhran who chipped the ball over the keeper from the corner of the box to make it 3-0. In the 47th minute Thomas was fouled on the edge of the box and got up to take the resulting free and struck a wonderful free-kick into the top corner. In the 54th minute Bonagee were awarded a penalty and Ben Gallagher slammed home the penalty giving Daniel Crawford no chance in the Cappry goal. This proved to be only a consolation goal as the Cappry defence held firm for the remainder of the match.

The U12’s played Lagan Harps on Friday evening in Cappry Park. The game had to be stopped for a while during the 1st half when the flood lights failed. When the game got started again it was the two defences who were having the better of the exchanges. The game was scoreless at half time. The 2nd half proved to be much the same as the 1st with the defences on top. Cappry finally broke the deadlock when Gavin McCormack scored after a bit of a scramble at the back post following a set piece. Cappry seen out the game to gain 3 valuable points.

Next up is a home game against Castlefin Celtic on Tuesday evening in Cappry Park, kick off 7.30pm.

The Crusaders got off the mark with a comprehensive win today in Cappry Park.

Conor Thompson, Shane McBride, Oisin Doherty and Jason Dunne grabbing the all important goals. It was a great team performance from all of the 16 players who all played their part. A special mention to Conor Lynch and Kian Mulligan who put in a great display putting their heart into their tackling. Onwards and upwards!

Away game against Lurgy Celtic next weekend.

Cappry dropped their 1st points of the season with a tough away game. They took the lead in the game through Eoin Stewart before going 2-1 down. They showed great character to come back strong and not to let the heads drop. They got the equaliser from the in form Eoin McGonagle. On another day they could have been coming home with the 3 points but a result to be proud of.

Next up is a home game against Bonagee Arcade this weekend.

The Last Man Standing competition is entering the 3rd week and all selections are being posted on our Facebook page.