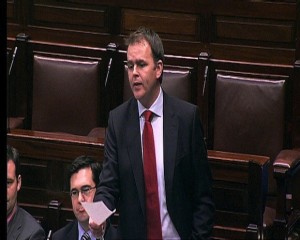 It says it will stage a protest against water charges outside the Mount Errigal Hotel tonight at 6pm where Minister McHugh will attend the Cleaner Community Awards.

A spokesperson for Can’t Pay Won’t Pay defended the decision to target the Fine Gael TD at a community awards event.

Anti-austerity campaigners were heavily criticised after a protest outside a school in Milford two years ago when eggs were thrown at Taoiseach Enda Kenny.

“The government is currently debating how they will get people to pay water charges, following the huge protests. It has been reported that they are considering a €100 bribe to get people to register, along with cuts in the levels of the charges,” said Francis McCafferty.

“We want to send a message to Minister McHugh that it doesn’t matter what schemes they will come up, we are determined not to pay their charges.

“We know only too well that whatever sweeteners are offered now, they will be withdrawn in the future and the charges will rise. We are not looking for clarity or reassurance, we want the charges withdrawn.”

McCafferty added: “We are asking people to join our protest tonight and send Minister McHugh a strong message to take back to his government that many people in Donegal have already decided to join the boycott of water charges.”

Gardaí are expected to be at the hotel in large numbers.