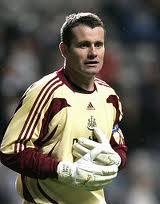 GIVEN HITS BACK AT SCOTS OVER McGEADY AND McCARTHY

IRELAND goalie Shay Given has hit back at plans by Scottish fans to target Aiden McGeady and James McCarthy at Celtic Park on Friday night in the Euro 2016 qualifier.

The Lifford native says he expects the atmosphere to have all the hostility and venom of an Old Firm derby.

But he rounded on the hosts for trying to unsettle the Everton pair James McCarthy and Aiden McGeady.

McCarthy was born in Glasgow, McGeady in Falkirk – and both with grandparents from Co Donegal.

Former Scotland international Gordon McQueen even urged supporters to give the defectors “a horrible welcome”.

However Shay said: “The comments were a bit unfair as some of the Scottish players were born in England but have Scottish parents and that.

“It can’t be one rule for Ireland and one rule for others. They are in the exact same situation, so some of the comments were a bit personal and a wee bit over the top. I just think there is no need to go to that sort of level. They are the rules and every country is the same. I think it was unfair on James and Aiden to single them out.

“We can’t tell fans what to do or what not to do. I mean, we’re going into the Scotland environment and the Scotland fans can do what they want. Aiden and James are experienced players now and they are fantastic players. Probably the reason we are talking about them is they are such great players. I don’t think they will be put off by any hostility.”

Alan McLoughlin, the former Ireland player who was born in Manchester to Irish parents, says other teams try to use it because they are jealous of Ireland’s success.

He told John Murray on RTE Radio One this morning that other countries can’t have it both ways.

He recalled criticism from the English of his Irish team in 1994 when Ireland played in the World Cup in the USA.

“They forgot that John Barnes was born in Jamaica,” he said.

GIVEN HITS BACK AT SCOTS OVER McGEADY AND McCARTHY was last modified: November 12th, 2014 by John2