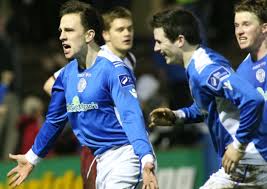 LYIT Men’s Soccer team have booked their place in the last eight of the All-Ireland despite going down 2-1 to a well-organised and spirited NUIG side.

Both sides knew they had both safely secured their passages to the last eight prior to kick-off, but the game was a play-off for top spot in the group.

The winners knew a victory would secure home advantage in the quarter-finals.

In a evenly contested match between two quality sides, this game was forced into extra-time to find a winner.

Unfortunately for Niall McGonagle’s side it was NUIG who got the all important winner to secure top spot in the group.

The game was deadlocked at half-time, but shortly after the re-start NUIG took the lead.

However, that was cancelled out by Institute FC striker Paul McVeigh who scored an absolute thunderbolt to make the game level.

However, that strike was in vain, as the Galway side nicked it late on in extra-time to secure home advantage in the last eight.

LYIT manager Niall McGonagle told Donegal Daily, “I’m absolutely delighted with the performance of the team, they were fantastic.

“They’re an excellent side, but I don’t think we deserved to lose the game, I think a draw would’ve been a fair result.

McGonagle was full of praise for goalkeeper Eoin Gallen who produced a series of excellent saves throughout the game.

“Eoin was outstanding, some of the saves he made were absolutely inspired, he was brilliant.

“But as I said, I’m delighted with the performance, disappointed with the result, but we’re in the last eight and that was our objective from the start.

Raymond Foy made his first appearance for McGonagle’s side, and he brought quality to the midfield, he was ably assisted by Ryan Curran and Paul McVeigh.

Finn Harps player Carol Tiofack also made his first appearance for McGonagle’s side and also  impressed.

The draw for the last eight of the All-Ireland series will be made in Dublin tomorrow.