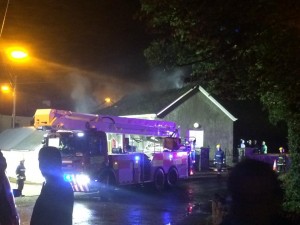 The scene of the arson attack on the Convoy Orange Hall last month.

Representatives of The Orange Order have revealed they’ve met with a high-ranking official within the Gardaí over the double-arson attacks on Orange Halls in Donegal last month.

The deliberate destruction of the two Orange Halls sparked outrage in the communities of Newtoncunningham and Convoy.

The arson attacks were carried out just a few weeks apart, and both sides of the community in both areas condemned those responsible for the senseless attacks.

However, a member of the Orange Order has hailed a meeting they had with a leading Garda official as ‘extremely useful’.

The members of the Orange Order sought the meeting so they could be briefed on the on-going investigations being made by the Gardaí on the double arson attacks which were carried out last month.

The Orange Order also revealed that during the meeting, members made pleas that the Dublin Government look into the prospect of providing financial aid for the two building destroyed in the arson attacks.

Mr Stevenson told the Belfast Newsletter, “This was an extremely useful meeting with Assistant Commissioner Kenny.

“We outlined our deep concern and that of our members in Newtowncunningham and Convoy regarding the deliberate destruction of Orange property in the Donegal area.

“Those responsible must not be allowed to succeed as both halls acted as social hubs and served all sections of the wider community.

He said he is also to meet the Republic’s Justice and Equality Minister, Frances Fitzgerald TD, in weeks to come.

Mr Stevenson concluded, “We will be putting the case to the Irish government very strongly that there is an obligation and responsibility on their part to liaise with the affected lodges.

“They must explore with them all funding opportunities that are available to ensure all possible means of aid and assistance are taken into consideration.