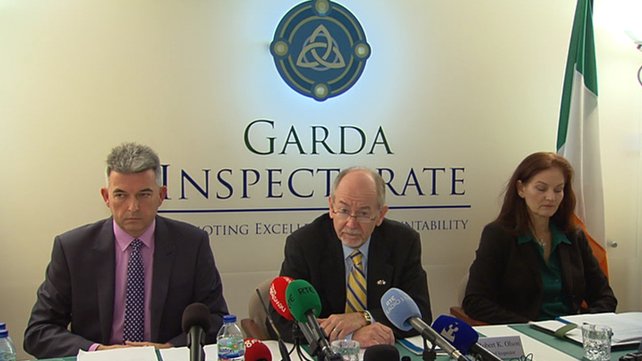 The Inspectorate panel deliver their report

A DAMNING Garda Inspectorate report has complained that Donegal does not have a single Garda available to work as a community police officer.

Donegal was one of the areas inspected by Chief Inspector Robert K Olson and his team.

But the 500-page report, while critical of gardaí here in the county and some of their practices, appears to miss the fact that so many officers have been cut from the force in Donegal.

“With the closure of garda stations, the dormitory nature of many rural communities and the change of lifestyle across the nation, it is important to review and adapt how the police work with communities to deliver an effective operational response,” the report says.

“Across the seven divisions visited, the Inspectorate found large variations in both the numbers of gardaí assigned to community policing and their role in the investigation of crime.

“With the introduction of the new roster in April 2012, many divisions moved members from community policing units to create the required extra regular unit. Donegal, Kildare and Mayo effectively have no full-time community gardaí.”

The inspection also found that one fifth of incidents were not recorded by Gardaí within 24 hours of them taking place.

However it took more than a week for 9.1% of these incidents – 139 in total – to be recorded as having taken place.

“A crime incident should be recorded immediately and at least before the end of a member’s duty,” says the report.

“Some of the crimes shown that were created within 24 hours are still outside of the Garda Directive as the reports were not completed within a tour of duty.

“The Inspectorate accepts that the failure to create a PULSE incident does not necessarily mean in all cases that a crime was not investigated. However, the non-recording of crimes affects the accuracy of the data and the ability of a supervisor to check that all actions were correctly completed.”

The Inspectorate also visited Milford Garda Station for the report, saying one of the three cells there was out of use.

They found the custody area at the station “unsatisfactory”.

The report also found that despite the vast are of County Donegal the number of patrol cars per Garda officers was the same as the national average – one car for every ten gardaí.

However rank and file Donegal gardaí are already dismissing large parts of the report.

“There’s nothing in there several million euro couldn’t fix. It’s the Department of Justice which needs to be spoken to, not gardaí,” said one officer.